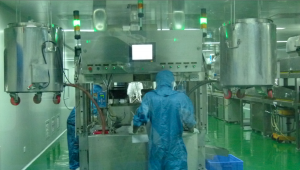 Despite major improvement in access to HIV/Aids and TB treatment most people living in Africa still lack access to reliable and appropriate medicines. They continue to struggle with the worst health status in the world. Why is this happening? What can be done?

We set out to discover what was happening to local pharmaceutical production in Kenya and Tanzania. We also wanted to explore the extent to which more local production of medicines could improve access for those countries’ populations.

It’s a timely question. Both countries have an established pharmaceutical industry with scope for expansion into a huge and expanding regional market that is largely served by imports.

The two year research project surveyed those who buy medicines for facilities and shops, public and private, and included interviews with local manufacturers. We found that in both countries, but especially in Tanzania, the industries are vital to meeting their populations’ health needs, but struggled against external competition.

But, more optimistically, our findings also showed that this situation can be turned around.

The domestic market for medicines is large. In 2013, we estimated that local firms in Tanzania were supplying 15% of a US$333 million market for pharmaceuticals (down from a third in 2009). Kenya-based firms were supplying a third of a US$577 million market. Access to reliable essential medicines is poor in both countries. It depends heavily on out-of-pocket payment by low income populations.

Medicines have been made in African countries since the 1930s, and after independence many governments supported the development of pharmaceutical manufacturing. There were two particular bursts of investment: in the 1970s – as part of early efforts to promote industrialisation – and from the 1990s onwards as industrialisation efforts revived.

In addition to this firms in Africa, most of which are owned by African capital, have a record of promoting inclusive access to medicines. Research in Tanzania, for example, showed that the local producers distributed essential medicines effectively in both rural and urban areas. Imports, on the other hand, were much less likely to move beyond the towns in which they arrived.

Several local firms had a good reputation: their products were widely regarded as reliable and indeed were preferred to Indian products of uncertain origin in the private market. In Kenya too, up-country facilities rely heavily on low cost locally produced medicines.

Tanzania’s firms mainly produce basic essential medicines in the form of tablets and capsules along with syrups for children. Kenya’s industry is by far the largest in East Africa. It also produces more complex items such as creams, intravenous drips and injectables.

External competition is skewed against local producers by a context of increasingly free trade in medicines, together with tax and import regimes that favoured importers, and aid funding that bypassed and undermined local producers.

In 2009, for example, the East African Community agreed to a zero tariff rate on imports of finished medicines with the rationale of meeting essential health needs. But local producers frequently have to pay duties on their imports of inputs for production.

In addition, the large aid funders bypass local African producers almost entirely, buying in bulk from overseas. This means that when Tanzania and Kenya switched to the new, and much more expensive, combination anti-malaria therapies, local firms that had been supplying most of the anti-malarials until then lost the business. One Tanzanian firm lost a third of its turnover. Rural populations used to reliable access to cheap locally produced anti-malarials, through facilities and private shops, became reliant on sometimes erratic imports of medicines.

Our research makes clear that the current pattern of globalisation of access to medicines simply isn’t working and isn’t sustainable. Rather than strengthening the domestic economic and political links – between population needs for medicines, government health policy and industrial development – it weakens them.

With the right government policies, supported by a rethink by donors, the demand for medicines can be directed more towards local firms. This in turn can help them improve their products and become more competitive, generating much needed industrial employment and productivity.

Industrialisation in pharmaceuticals also brings with it the growth of technological, industrial, intellectual, organisational and research-related capabilities. Without these, quality medicines can’t be produced and health systems can’t be improved. Firms whose business focus is the domestic and regional market have an incentive to distribute and market their medicines effectively. Access improves and everyone gains.

There is real optimism that this turnaround can happen. African policy makers are already increasingly aware of the importance of this agenda. The Tanzanian government has made pharmaceuticals a priority industry in its new five-year development plan.

Pan-African bodies are focusing on the issue too. The African Union Commission has developed a pharmaceutical manufacturing plan for Africa. NEPAD has been working on bringing together cross-country regulation of medicines. Meanwhile, international bodies such as the WHO and European and Japanese donors are supporting manufacturing improvement in pharmaceuticals. This East African research is widely cited internationally.

A number of other African countries are showing what can be done. Ghana, Ethiopia and South Africa have all successfully supported the growth and technological improvement of medicines manufacturing in their countries.

But health and industrial policymakers have to work together – something of a revolution in itself – if these efforts are to succeed. The route to improved, more inclusive access to medicines needs to be based on an active African industrial policy that supports manufacturing. This should be coupled with a health policy geared towards the purchase and use of local medicines.

Professor Samuel Wangwe is Executive Director of REPOA (Policy Research for Development), one of the leading independent research institutions in Tanzania, and Maureen Mackintosh is Professor of Economics at The Open University and Director of IKD. This article was originally published on The Conversation and we are grateful for their permission to republish it. Read the original article.