Should Burundians care about English as a global language? 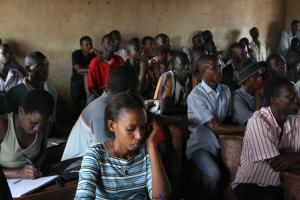 Arcade Nduwimana discusses linguistic politics and limited fluency of English in Burundi, exploring intricacies between the national, regional and global contexts. While in one sense it seems paradoxical to promote the use of English in a blog series with decolonial aspirations, an acknowledgment of repercussions for people who do not speak it is necessary to grasp contemporary colonial logics. Arcade is currently a PhD scholar in Applied Linguistics at the University of Burundi. He also teaches at Ecole Normale Supérieure (of Burundi). He has a Master’s degree in Applied Linguistics and ESP and a Bachelors in English Language and Literature from Kasdi Merbah University-Ouargla in Algeria. His main area of interest is ESP.

English is a global language, used everywhere and for every purpose. After people’s native tongue, English is the world’s most common language for day-to-day communication with strangers – asking for guidance on roads, at airports, in hotels – and the first choice for publishing research on an international stage. It has become the preferred language across the sciences, technology, education, business and the tourism industry.

Despite this global status, the vast majority of Burundians remain unable to communicate in English fluently, putting them at a disadvantage on both a regional and international scale. It poses a serious question of competitiveness, preventing Burundians’ full integration into the labour market beyond its borders, publishing as high-quality researchers for an international audience and accessing scholarships for study-abroad programmes.

Burundi is a small landlocked country with three main languages spoken: Kirundi, French and Kiswahili. Kirundi, our indigenous language, is the national language spoken by all Burundians, used more in informal social settings. Then we have French, the country’s second most spoken language and officially used in administration, education and other formal contexts – only spoken by the privileged. The third language is Kiswahili, the regional language of East Africa, and spoken by few Burundians mainly living in provinces or in towns bordering Tanzania to the east and the Democratic Republic of Congo to the west. As Burundians manage the majority of local and regional communications in those three languages, English is set aside.

Teaching English for the market

English has been taught in primary schools since 2005–6 and, with the official integration of Burundi into the East African Community (EAC) in July 2007, the government decided to further promote its study. In 2014 the Burundian government declared English the third official language after Kirundi and French (but notably not Kiswahili, which still lacks the status).

Despite these measures, most Burundians still lack English fluency (except the few who specialise in English Studies). In 2010, less than 5% of Burundians were fluent. This is attributed to the quality of teaching and that it remains deprioritised.

The consequence is that Burundians cannot compete for regional job opportunities. Whether looking for good employment in Burundi itself, on occasion, or the wider EAC, English is often a prerequisite, where even poorly spoken English is un-competitive. Even Burundian businessmen who cannot communicate in English will experience difficulties and are often required to hire English translators to extend their activities beyond Burundi’s borders.

Burundian academics who cannot read, write, listen and speak English also end up disadvantaged compared to fluent and native English speakers. With no or limited English abilities their submissions to international conferences or journals are rejected. As Drubin and Kellogg explain, ‘For scientists whose first language is not English, writing manuscripts and grants, preparing oral presenta­tions, and communicating directly with other scientists in English is much more challenging than it is for native speakers of English’. Even though some will succeed in publishing their works, it often comes with substantial revisions, which may involve paying for editors or translators, which disincentivises most local scholars.

Some Burundian students miss out on opportunities to apply for foreign scholarships offered by Anglophone universities. At the Gitega Forum held in October 2019, it was reported that nine out of 10 scholarships given to Burundians were cancelled due to applicants failing to meet English prerequisite standards. Even for those who manage to access English universities, adapting to the teaching demands remains difficult. This was testified by one of my Burundian colleagues who studied in a Chinese English-taught university:

‘When I first got to attend lectures delivered in English, I frequently questioned my reasons for going to China. The first month passed and I still could not understand the content due to the language. The second month passed too, and yet, I still could not understand. Until a friend of mine helped me. He told me that the only way to overcome these difficulties was to try to improve my English and to conquer the fear of making mistakes when speaking in English. Two months after taking his advice, I no longer had difficulties listening to lecturers in English. I now feel more comfortable using English than French.’

Even students who stay in Burundi are not spared. As more and more scientific literature is written in English, they are compelled to use resources published in the language.

Burundians’ lack of fluency in English poses severe consequences in terms of their competitiveness in regional and global markets. Policymakers, university lecturers and Burundian diaspora studying in Anglophone universities should take the lead in raising awareness of the need to engage the global language, otherwise the country’s citizens will remain disadvantaged compared to their fluent international peers. As a lecturer at the University of Burundi said: ‘One of the characteristics of modern illiteracy is the inability to communicate in English’.