What are the drivers of child homelessness in the DRC? 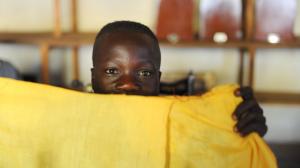 Like many cities in the DRC, a walk through Goma’s streets reveals children employing various coping strategies for survival. But what are these children’s stories? Ishara Tchumisi explains the causes and consequences of children’s homelessness and the action needed by national government. Isharabin Tchumisi is a researcher at the Centre for Public Authority and International Development. His work focuses on water management, gender relations and how households are affected by prolonged shocks such as unemployment in Goma, the DRC. He is also training to become a pastor.

Article 41 of the Democratic Republic of Congo’s (DRC) Constitution states that public authorities must ensure the protection of children in need. Still, many children end up homeless without any government support in the city of Goma. Some of these children became homeless after being evicted from their homes, and others decided to leave their family home voluntary. Regardless, they all fight to survive daily on the streets. Exploring these different elements, I call for the government, national and international organisations to mobilise to offer these children protection and education, so they can get a second chance for a prosperous future.

As I walked on Alanine street in Goma next to the market as a social worker, I saw these homeless children and how often society ignores them. It is almost like they are invisible. I wanted to understand what happened, and why they were left out on the street. Based on conversations with these children, I present two testimonies I believe are representative of the main reasons behind the presence of homeless children in Goma.

The drivers behind child homelessness in Goma

On the one hand, some children decide to flee their homes due to domestic issues. J.K. is one of them, who left his family home after an argument with his father:

‘My father hit me because I have misused his and my mother’s last savings which they gave me so that I could pay for my tuition fees. I was not even going to class. After my father beat me, I was angry and decided to leave without knowing where I was going to’.

On the other hand, some children have been expelled by their parents. Often they have been accused of practising witchcraft, which is the most common reason in Goma. Further complications arise when there is a separation or bereavement, and families try to rebuild and establish harmony between a new stepparent and a child, particularly between a step-mother and children from a previous marriage.

R.S., a 21-year-old girl, tells us how she has been kicked out by her father after he remarried another woman.

‘In 2013, my mother died. One year after, my father remarried another woman. He then started saying that I wanted to poison my stepmother. Since the accusation was confirmed by my father’s cousin, my father decided to chase me away. My family refused to help me because my stepmother had already convinced them that I was a witch.’

Because many parents were killed during the civil war, some orphan children have had no choice but to live on the streets. With deceased parents and lacking family support, these children were incapable of taking care of themselves and their homes. These different causes seriously affect options left to children, including the possibility of returning home.

Whether by choice or eviction, homeless children are left with no option but to find coping strategies to survive. I observed that some of the street kids were trying to earn their living through peaceful means, by offering services to citizens such as selling goods, or offering themselves to maintenance works in the streets. Even if these activities are carried out informally, it helps the children to raise money to feed themselves and respond to potential difficulties. Moreover, people passing by give them some small amounts of money, providing an additional source of income.

I also noted not all coping strategies were peaceful. Street children could be violent and rob people in the streets. They might intimidate a victim to not resist the aggression. But when a street child is attacked, such as for having robbed someone passing by, others from the same street group will run to help. They will do their best to get their ‘brother’ or ‘sister’ out of a situation without problems.

Belonging to a group becomes a form of protection, while also compensating for their need for affection and love. The group becomes a surrogate family. It is such solidarity that helps them fight against the violence perpetrated against them on the streets. Indeed, homeless children are victims of various forms of abuse: they face physical blows and insults from traders, violence and racketeering from the police with unfulfilled promises of protection. Solidarity is the children’s best way of protecting themselves. A vicious cycle of violence is created, however, when trying to protect themselves from violence, as these children end up perpetrating violence themselves.

Despite such issues, homeless children are still children. Living in the streets inevitably has a negative impact on their potential success and development as adults, which institutions seem to forget that today’s children will become. When families and communities are failing them, street children should be taken care of by the government or other national and international organisations. Such support is their legal right.

I cannot stress enough the importance of these children’s education and the consequent positive impacts on their social and professional integration. Unfortunately, homeless children are still not part of the government’s agenda, especially when the local administration bodies are overwhelmed by various economic and political crises. But it does not take away the moral and legal responsibility of the government to address such crucial societal needs.

Letting this issue persist not only equals violating these children’s rights, but it also reproduces more violence and losing the potential contributions these children make to the country’s economic development. Finding a solution would certainly not be easy and will require the participation of various stakeholders, such as national and local government, and other institutions with relevant capacities. Here, I call for the government with support from NGOs and citizens to create centres where children have a place to live, eat and receive an education. Such centres shall allow some degree of freedom to avoid potential conflicts, while still giving them access to basic social services.

Today, when we walk the streets in Goma, we should pay more attention to street children, seeing them as our sons and daughters, the hope of our nation, future adults who need our support.