AOUG Will Swann Award for Innovation and Knowledge Development 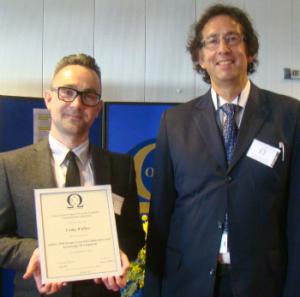 The Association of Open University Graduates (AOUG) Foundation for Education Research Awards are presented annually to students nominated by their Dean of Faculty or Head of Research Centre in recognition of the groundbreaking research carried out at the OU. This year Craig Walker, a DPP doctoral student and IKD member, was presented with the AOUG Will Swann Award for Innovation and Knowledge Development.

A major challenge in rebuilding societies after protracted civil war is to deal with the effects of long-term exposure to violence. Craig’s thesis, due to be submitted in December, uses Nepal and Mozambique as case studies to explore the impact of public participation on the process of transformation to a peaceful society that can deal with conflicts non-violently.

At the ceremony on 2 October the winners were presented with their award by AOUG Chair, Margaret Stobirski. In addition, Will Swann, who was Director, Students at the OU until his retirement in 2013, and who in 2014 was awarded an MBE for services to higher education, had these words to say on the first presentation of the award named in his honour:

I felt immediately attracted to Craig’s work, built, as it is, on a recognition that conflict-resolution is a work for the many, not the few. If Craig’s work not only uncovers new understandings of these processes, but also helps nations who have been beset by violence to return to peace, then it will be a contribution to knowledge and social innovation of which the OU can be justly proud.

Read more about AOUG and the other award winners.