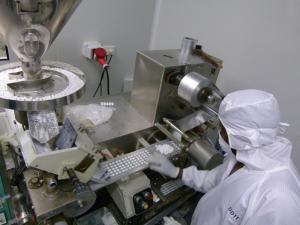 Work undertaken by The Open University, with a network of African and other experts, is contributing to policy change around industry and healthcare in East Africa and internationally.

‘Integrating health care and industrialisation in Africa’ was initiated in 2012 by a project funded by the ESRC through the DFID-ESRC Growth Research Programme (GEDRP). The research responded to increasing concerns in East Africa that rising medicines imports, while hugely improving access to treatment for HIV and TB, were undermining some local pharmaceutical firms and failing to improve access to medicines more broadly. This initial project focused on Tanzania and Kenya, researching the hypothesis that better integration between industrial and health policies in low-income countries could contribute to economic and employment growth, strengthen industrial capability and sustainability, and also improve healthcare access and resilience.

Led by Maureen Mackintosh, Professor of Economics at The Open University, Dr Paula Tibandebage, then at Tanzanian think tank Research on Poverty Action (REPOA), and Dr Watu Wamae working with Kenyan think tank African Centre for Technology Studies (ACTS), the project collected and analysed health system data and interviewed key professionals to develop knowledge, insight and proposals for strengthening local health care supply chains. Throughout the project, the team worked effectively with existing networks and connections to bring together senior policymakers, health sector managers and the private sector to debate findings and shape its policy proposals through workshops and roundtables, working together to craft lists of policy recommendations.

The initial research project has proven to be the start, rather than the end, of what has been a growing body of work contributing to bringing together the health and industrial sectors to debate and effect change.

The project’s findings and recommendations have been taken up in the Tanzanian government’s latest National Five-Year Developmental Plan Nurturing Industrialisation for Economic Transformation and Human Development (2016), for example, which identifies the pharmaceutical sector as a priority for development. Members of the project team have been invited to participate in discussions with Médecins Sans Frontières on its global health role, and the World Health Organisations (WHO) has cited findings and papers from the project on their website. Dr Geoff Banda, member of the project team and Co-Director of Innogen Institute, produced a policy briefing for the African Union Commission on Financing African Local Pharmaceutical Production (2016), and Professor Mackintosh was invited to speak at the UN’s World Investment Forum 2016 on Access to Medicines in Africa.

Committed to sharing its knowledge and that of its networks as widely as possible, the team brought together, with UNIDO support, key individuals from across the project and beyond to produce a book on pharmaceutical production in Africa. Making Medicines in Africa: The Political Economy of Industrializing for Local Health is (Palgrave) available for free under Creative Commons licence, using funding secured by the programme team to ensure this combined knowledge can contribute to development and thinking across the health and industry sectors and policymakers working in and with low-income countries,

Maureen Mackintosh, Professor of Economics at The Open University, said: “The collaborative leadership of the research project by Tanzanian and Kenyan experts, with their extensive local track record, networks and convening abilities, was central to its success in contributing to policy in each country. The programme of work is continuing, building on the expanded network that produced Making Medicines in Africa and actively feeding into international debate.”

Dr Julius Mugwagwa, Lecturer in Development Policy and Governance, worked with Professor Mackintosh and said: “This body of work, and the book, are an immense and timely contribution to efforts towards a better understanding of how increased capability to produce medicines locally can strengthen health delivery systems in developing countries. We have already seen, in East Africa and a recent collaboration with GIZ, that making the research findings readily available goes a long way in creating and sustaining a cross-disciplinary discussion among different academic, policy and practice groups tackling health and industrial development agendas locally and globally.”

More information about the programme, its approach and extensive impact so far can be found in the DEGRP’s impact case study for the work.