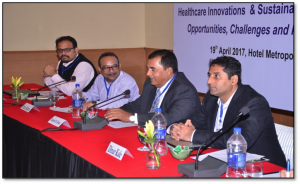 In spite of India’s global position as a leading pharmaceutical manufacturer, the accessibility of medicine remains a huge challenge, with many of the population – particularly in rural areas – still lacking access to even basic medicines and healthcare.

Indian Prime Minister Narendra Modi, however, recently announced the government’s resolve to tackle both availability and cost through strategies such as encouraging GPs to prescribe generic – rather than brand name – medicines.

The Role of Industry Associations in Influencing Healthcare Innovations and Sustainable Development in India: Opportunities, Challenges and Policy Considerations, a half-day workshop organised by Theo Papaioannou and Dinar Kale in partnership with the Centre for Responsible Business in New Delhi, thus offered the perfect opportunity to discuss how key stakeholders – including pharmaceutical companies, trade associations, government bodies, health sector professionals, NGO workers and scholars – might best respond to this call.

In the keynote speech, Dr N K Pandey (Asian Institute of Medical Sciences) described how the private sector plays a dominant role in the Indian health sector. As insurance is limited to the urban middle class, the poor are frequently doubly impoverished when they try to access healthcare services in the country.

Theo Papaiannou, meanwhile, presented his research project, Unpacking the Role of Industry Associations in Innovation & Development. As well as discussing the applicability of the National Innovation System (NIS) in developing countries and emphasising the linkages of institutional actors – in particular those of industry and government – he also asserted the neglected role of industry associations as key intermediaries.

As a whole, the meeting highlighted the importance of cross-sectional discussions in understanding the role that needs to be played by the key actors – government, regulators, industry associations and civil society – if the Indian pharmaceutical industry is to help the country meet the healthcare needs of all its people.