Innovation as a political process of development 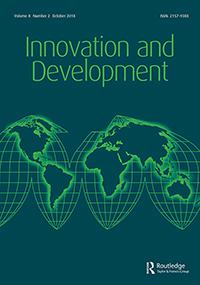 The abstract can be viewed below, and the article is available to download from the Innovation and Development website.

Abstract: Technological innovation has been one of the fastest growing areas of economics scholarship and one where history and philosophy have played important roles. Since the reconstruction of Joseph Schumpeter’s view of innovation as a driver of capitalist development and the subsequent formation of the national innovation systems (NIS) theory in the early 1990s that can be described as neo-Schumpeterian, there has been a continuous attempt to explain innovation in social-scientific terms. However, much of this has positioned innovation as a value-neutral process. We argue that such value-neutrality requires closer analysis because the neo-Schumpeterian thinkers do appear to acknowledge that capitalism itself is an uneven, dynamic process. The relationship between the vital dynamism of such analysis of technological change and the context of its description of power relations and value deserves further attention. Under what conditions can systemic interactions between institutions and actors function as universal frameworks? Can the theory of innovation be abstracted from its social and political bases? This paper aims to redefine innovation as a predominately political process that is both historical and contextual, and thus draw out its implications for economics and development. The paper suggests some preliminary steps toward a more critical approach to innovation scholarship.
View and download article.