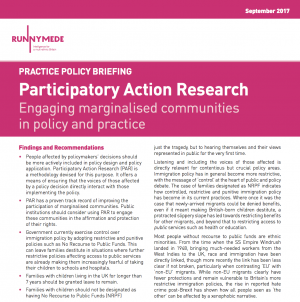 This briefing explains the use of Participatory Action Research (PAR) with marginalised groups of people. In essence these were people who experience barriers in interacting with representatives of social policy and practice on a daily basis.

Listening and including the voices of those affected is directly relevant for contentious but crucial policy areas. Immigration policy has in general become more restrictive, with the message of ‘control’ at the heart of public and policy debate. The case of families designated as NRPF indicates how controlled, restrictive and punitive immigration policy has become in its current practices. Where once it was the case that newly-arrived migrants could be denied benefits, even if it meant making British-born children destitute, a protracted slippery slope has led towards restricting benefits for other migrants, and beyond that to restricting access to public services such as health or education.