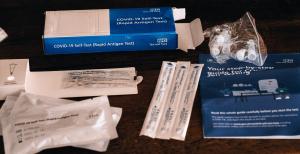 Covid-19 has forced many countries to rapidly increase their technological capabilities in diagnostics, personal protective equipment (PPE) and medicines. Global shortages of critical equipment and supplies induced by the pandemic have forced countries that traditionally import such equipment and supplies to build and ramp up their indigenous testing capacities and scale up production of PPEs. While shades of a new economic nationalism pervade much of the political discourse in support of this approach, there is surprising institutional variation in the Covid-19 industrial response of supplier countries. When viewed through an innovation system lens, we suggest that this inward focus on domestic capacity and production is actually coupled with intensified global outreach to new and existing suppliers. Contrary to some of the accompanying rhetoric, the actual policy and practice is one where no nation can do it alone. In this way, the pandemic can illuminate the adaptability of innovation systems and the continued importance of external sources of knowledge and resources under emergency conditions. This industrial policy response can also be viewed as largely temporary, although its influence on post-pandemic industrial strategy and future emergency response warrants further inquiry into how it has been implemented in various national contexts. As such, this paper looks at the COVID emergency industrial response of the UK for several reasons. In particular, we look at the UK’s efforts at building their laboratory testing capabilities and for increasing production of PPE. The paper’s early findings present useful building blocks of how industrial innovation systems can effectively respond and adapt, while also exposing some limitations to the innovation systems approach, specifically concerning local health capabilities, production, and delivery.