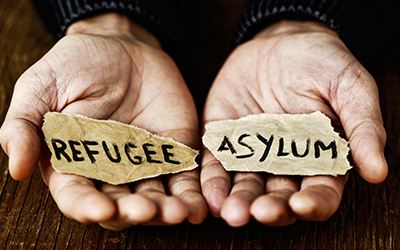 To mark Refugee Week 2018, The Open University will be holding a range of events from Monday 18 to Friday 22 June. You can find an outline of the programme below with links to register to events or you can download a poster. Further information on each event will follow shortly.

The artworks in this exhibit were crafted by five Chinese women detained in Yarl’s Wood Immigration Removal Centre. Their duration in detention ranged from four months to fourteen months while their cases were pending. Three of them were detained multiple times before they were removed from the UK or released back in the British community.

The artworks in this exhibit are displayed in locked metal cages, intended for small animals, symbolising the secured spaces of confinement and control where the art was produced. Art created in detention can be seen as a means of coping with anxiety and uncertainty. The practice of paper folding art (also known as “origami”) may help mitigate the negative impact of an indefinite detention regime on detainees’ mental health and emotional well-being.

A lunchtime discussion with Jo Vincett will be held on Tuesday 19 June between 12:00-13:00, with lunch and refreshments

In the aftermath of the so-called "refugee crisis" and the implementation of the EU-Turkey Statement, refugees have indefinitely been trapped on Lesbos Island. Lesbos has been transformed into a "prison island" where racism, violence and xenophobia are gradually escalating. At the same time, acts of everyday solidarity and resistance take place on Lesbos, as an antidote to racism, fear and violence.

This event is designed for academics, practitioners, policymakers and journalists
Register for this event

More than 65 million people around the world have been forced from their homes to escape famine, climate change and war, the greatest displacement since World War II. Filmmaker Ai Weiwei examines the staggering scale of the refugee crisis and its profoundly personal human impact. Over the course of one year in 23 countries, Weiwei follows a chain of urgent human stories that stretch across the globe, including Afghanistan, France, Greece, Germany and Iraq.

Shortly before the main screening, we will be showing two short films, developed with input from two OU academics, Dr Vita Terry and Dr Amy Charlesworth.

The documentary tells the story of an asylum seeker in the UK, whose hope of securing safety and a better future for his family has been challenged, as they continually experience multiple barriers, from restricted entitlements, limited support and growing hostility. Five years on, the asylum seeker illustrates the important contribution migrants can have within communities, focusing on his experience of establishing ESOL classes at a time of shrinking service provision. These classes have benefited the community by building language capacity and also bringing diverse populations together to promote integration and cohesion.

This short animated film tells the story of the thousands of women from disadvantaged backgrounds, in countries such as the Philippines, Indonesia, South Asia or Africa, who have to find work abroad to support their families. Employed as “maids,” and isolated in foreign households, many of these workers find themselves trapped in conditions of great hardship.

The film was made in partnership with Justice 4 Domestic Workers (a registered charity, The Voice of Domestic Workers – an organisation formed by domestic workers currently living in the UK. Based on the real life stories of migrant domestic workers, They call us Maids uses vivid watercolour animation to reveal disturbing truths about modern slavery.

Register for this event

Documentary screening of 'The Crossing' and discussion with the film maker, OU Belfast, Wednesday 20 June, 10:00 - 11:00 (Internal OU staff only)

Conflicts and disasters displaced 30.6 million people in 2017  - the equivalent of 80,000 people each day.  In order to raise awareness of the plight of people who are forced to migrate, surrender their possessions, leave their families and embark on a new life in a new country with a new language, OU Northern Ireland will be hosting an event as part of the OU's Refugee Week.

During the hour, organisers will be showing the extraordinary documentary style short film, The Crossing, which follows the journey of musician Joby Fox on his mission to make a difference to migrants and refugees making the perilous journey across the Mediterranean.  Joby will be joining the event for a post film discussion on his experiences, along with other local community representatives.

'Refuge or detention? Challenging the hostile reception of asylum seekers and refugees in the UK'

While each asylum seeker and refugee has an individual story, they share the hope to find a place of hospitality rather than hostility. In this panel, former detainees and representatives from the legal, academic and voluntary/third sectors discuss the social injustices faced by many of those in immigration detention, particularly those seeking asylum. Panel members include:

For further information, please email heidi.mccafferty@open.ac.uk who is organising this week on behalf of the OU.