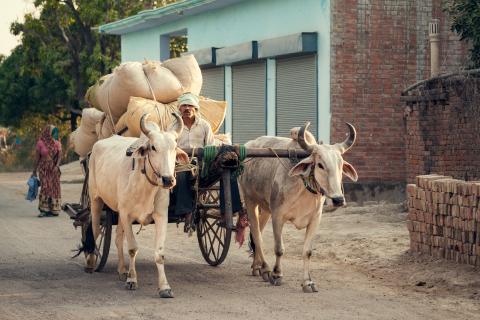 The Open University course materials demonstrated being ‘Open to People’ through programmes as such as 'Punjab to Chatham', which was filmed on location in India and the UK in 1980 and 1981. Teachers and other students were encouraged to understand migrants and migration through tracking the experiences of families such as the one mentioned in this programme.

The opening clip is transcribed below, plus the Open University has made the whole programme available again to see.

Transcript of the opening clip

Terry Thomas of the Open University in Wales: It's early morning in the Punjab. Swaren Kaur Ghattaora walks to the family's fields alone. She's not well, and she's depressed, because, after eight years of being refused entry, she's still waiting to join her husband in England where he has a regular job and his own house. She and her family are casualties of our ever-tightening immigration laws. Trying to cope with these regulations is a distressingly frequent problem for all black and brown migrants to Britain.

Her husband Daulet Singh Ghattaora works the night shift in a Kent engineering factory as a lathe operator, a semiskilled job which he's been able to master, though his English is not good. But, the stresses of separation are beginning to tell. When he came here at first he had no idea of the troubles ahead, or the effect it would have on his family.

Swaren Kaur Ghattaora: What could I do? I had to take responsibility here. We were all terribly worried as we were all separated. We have not been able to get permission to go to England in spite of making visits to the British High Commission in Delhi, for the last seven years. That is why we had to stay here.We did not even get an interview for a very long time. If we had been able to get an entry permit we would have gone straight away.

You know, when one is short of money and other necessities of life, one worries, and this is bound to affect the health. I want to go because my husband lives there. I've got children. I need money for their education. In England he will help to look after them. Then he will decide whether they should work or study.But at least we'll all be together again.

Terry Thomas: The case of the Ghattaora family is not unusual, so I went to the Punjab to see for myself how the immigration laws work out in practice, and to get some idea of what they must look like from the point of view of the migrants themselves.