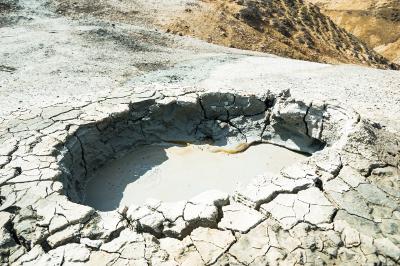 A paper published in  Nature Geoscience on Monday 18 May 2020, reveals that mud flows exposed to the low atmospheric pressures found on Mars will behave in a similar way to lava flows in Hawaii or Iceland.

Dr Manish Patel, Dr Matt Balme and Dr Matthew Sylvest from the OU are part of the European team that made this discovery and used Dr Patel’s state-of-the-art low-pressure Mars Chamber to address the knowledge gap and to investigate the lava-like flows on Mars.

The team, led by Dr. Petr Brož from the Institute of Geophysics of the Czech Academy of Sciences, poured a water-rich mud over a cold sandy surface in the low-pressure chamber and multiple cameras recorded the results. These experiments were designed to simulate the hostile Martian conditions revealing how the instability of water within the mud changes its behaviour.

The researchers found that under the low atmospheric pressure and low temperatures of the Martian surface, mud flows would end up looking like flows on Earth.

“This is a great example of how a seemingly bizarre idea for an experiment in a lab can revolutionise our interpretation of the features on another planet.  Bold ideas for experiments like Petr’s lead to new understanding.”