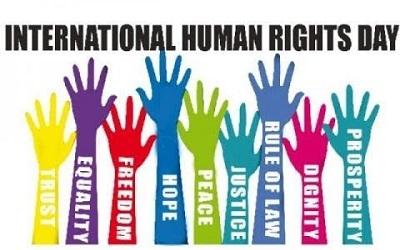 On International Human Rights Day, Dr Fidèle Mutwarasibo, Visiting Research Fellow in the OU's Centre for Voluntary Sector Leadership, invites followers of the Year of Mygration to join in marking the 70th anniversary of the Universal Declaration of Human Rights. He refers to his own experience to highlight the fact that human rights are real and not just abstract aspirations. He reminds us of the need to support those whose human rights are not vindicated closer to home and further afield. The recent migration ‘crisis’ in Europe is a reminder of the fact that closing our eyes to human rights in other countries does not necessarily make them disappear. The Windrush Generation's experience has exposed why we need to be vigilant on what goes on in our community. Human rights are real and are closer to us than we think.

I have been working in social justice for over two decades. One of the criticisms of the sector that I take to heart is to be called a do-gooder. While on the surface it is a negative label, it says a lot about the people who use the tag to criticise those of us who are passionate about human rights, equality and inclusion. Do-gooder is not the worst label people have ascribed me.

Today we celebrate the 70th anniversary of the Universal Declaration of Human Rights (UDHRs). To mark the UDHRs, the United Nations in its 317th Plenary Meeting of General Assembly institutionalised the International Human Rights Day (#StandUp4HumanRights) on December 4th, 1950. Let us pay a quick look to history and then look at the relevance of the Universal Declaration of Human Rights in the context of immigration, which has been central to the work of The Open University’s Year of Mygration, launched in January this year. Seventy years ago, today, the United Nations launched its first human rights protocol, the Universal Declaration of Human Rights. The Declaration was proclaimed by the United Nations General Assembly in Paris on 10 December 1948 (General Assembly resolution 217 A) as a common standard of achievements for all peoples and all nations. It sets out, for the first time, fundamental human rights to be universally protected and it has been translated into over 500 languages. In rolling out the UDHRs, there is no doubt the young United Nations was eager to move on from the atrocities committed before and during the second world war. Three articles of the UDHRs delve deeply into the area we have been covering over the last 12 months on the Year of Mygration portal. Article 13 states that (1) Everyone has the right to freedom of movement and residence within the borders of each state. (2) Everyone has the right to leave any country, including his own, and to return to his country. Article 14 argues that (1) Everyone has the right to seek and to enjoy in other countries asylum from persecution. (2) This right may not be invoked in the case of prosecutions genuinely arising from non-political crimes or acts contrary to the purposes and principles of the United Nations. Finally, Article 15 states that (1) Everyone has the right to a nationality. (2) No one shall be arbitrarily deprived of his nationality nor denied the right to change his nationality.

Closer to home, human rights are defined as, the basic rights and freedoms that belong to every person in the world, from birth until death. They apply regardless of where you are from, what you believe or how you choose to live your life. In Britain, our human rights are protected by the Human Rights Act 1998. What have I personally learnt through education and life experience about human rights?

When I was growing up in Africa, through my education, I was familiar with the UDHRs, the 1951 Refugee Convention, the 1967 New York Protocol and the African Union 1969 Refugee Convention. At the age of 9-10, my world turned upside down. Having done well in school, my late father organised a trip to a border town to celebrate my achievements. The trip was cut short when we saw remains of a dead person floating in Akagera River. Up to then I had been sheltered and not exposed to viewing dead people even if there were related to me. At the time it was customary in my community for people to pay their last respect to their dead before the burial ceremonies. I am recounting the story to highlight my passion for human rights and equality. I would later discover what led to my discovery in the river and will not delve into the whys. I am sure the esteemed leaders of this will read between the lines.

The incident helped me to realise that human rights were not abstract aspirations but real. This experience encouraged me to be close to refugees, starting with refugees from Burundi, Uganda and South Africa. These social practices would continue beyond my school and college years. They would later keep them on my migration journey until I reached Ireland via the Democratic Republic of Congo. I had the experience of dealing with my immigration issues, and we are short on space and time to explore my personal experience. Once I got myself sorted, I joined the rank of refugee/migrant advocates. One of the highlights of my social practices in the UK was chairing a Seminar hosted by The Open University on June 21st, 2018 to mark the refugee day.

In conclusion, I would like to highlight a few lessons I have learnt along the way. Some are personal, others are universal, and indeed a few in between. UDHRs apply across the board, and this means that they can be exercised and claimed wherever a person finds him/herself. A person on the margin can fight against the mighty who abuse their human rights as long as they identify the right channel and the proper support mechanisms. The mighty sometimes have to account for their actions concerning human rights abuse, although this often happens too late after their human rights abuses took place. There is resistance to human rights; indeed I have been reminded in my advocacy work that human rights language does not cut the mustard. Having said that I am unapologetic about the use of human rights terminology in my advocacy work on immigration and integration. The challenge to those us advocating on these issues is to use ordinary terms to describe human rights such as dignity, love, peace and trust, among others.  Above all, I am cognisant of the fact that humanising the refugee; the immigrant goes a long way in supporting advocacy work.

The portrayal of the refugee/migrant as the other by opinion formers has made it a challenge to advocate along with and for refugees and migrants. As we mark the 70th anniversary of the UDHRs, let’s take a step back, think about the climate that led to the development of UDHRs and the current debates on migration and race among others. The International Human Rights Day is relevant today. We need to hold institutions dealing with asylum claims and other migration-related applications accountable. Without a doubt, one of the biggest scandals in the UK in 2018 was the Windrush generation. There are other challenges as we look forward to 2019, including what happens to the millions of EU expatriates living in the UK post BREXIT, immigration-related detention, destitution of asylum seekers especially those who have exhausted their asylum claims, hate crimes that have been raising over the last couple of years. Human rights are real. Let’s support members of our community who are having difficulties in vindicating their human rights.