New miniature scientific laboratory to search for water on the Moon

As the 50th Anniversary of the Apollo 11 Moon Landing approaches, OU researchers are building a miniature laboratory to search for water on the lunar surface.

Drilling for water and other chemicals

The instrument is called ProSPA and, together with a drill system, it makes up the European Space Agency’s ‘PROSPECT’ package for prospecting for materials of high scientific and strategic value. It is a payload on the Russian Luna-27 spacecraft which will land near the lunar south pole in 2025.

“Luna-27 will allow us to study areas of the Moon that haven’t been visited by spacecraft before. The ground can be in a permanent deep freeze, meaning that water ice and other chemicals may have accumulated there over billions of years,” said Dr Simeon Barber who is leading the ProSPA project. “We will be unlocking a treasure trove of scientific information about the history of water on the Moon.”

Samples will be collected by the drill and delivered to the ProSPA ‘Solids Inlet System’, where they will be imaged by a 3D camera and then sealed in miniature ‘ovens’. Each sample will be heated to release gases to be identified and quantified by a mass spectrometer similar to that used on the Rosetta comet lander Philae.

“By analysing samples from different depths within the surface layers, and determining their isotopic compositions, we will learn about the origin and processing of water and other important molecules on our Moon,” said Dr Barber.

The instrument will also be used to extract oxygen from the Moon soil itself, by cooking it up using a recipe being developed at OU. The extraction of water and oxygen on the Moon, either from ice or from soil/rocks, is seen as a key enabling technology for future exploration. It could be used to supply lunar human bases, or even to fuel spacecraft for onward exploration into the solar system.

ProSPA will operate on the surface of the Moon for a year following its landing in 2025, with data being transmitted back to Earth for interpretation.

“We are very excited to be developing part of PROSPECT for ESA to conduct work-class science and exploration on the surface of the Moon” said Dr Barber. “ProSPA combines our heritage in building space instrumentation and in developing scientific experiments for use by our students through OU’s OpenSTEM Laboratories.”

PROSPECT is a programme of and funded by the European Space Agency, through prime contractor Leonardo S.p.A, Italy. 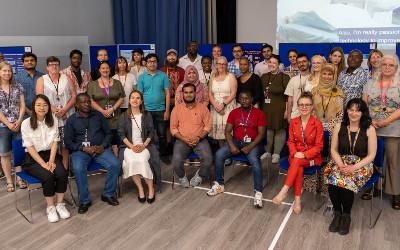