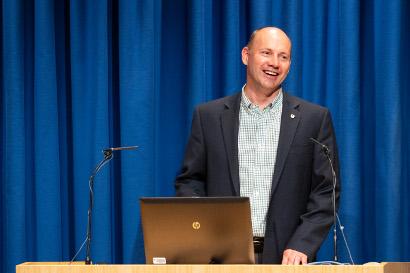 As The Open University celebrates its 50th anniversary, Mark Brandon, Professor in Polar Oceanography, delivered his inaugural lecture on the polar oceans and global climate and looked ahead to what could happen during the next 50 years.

In this lecture, Professor Brandon showed how over the last 50 years both the physical environment and our perception of the polar regions has changed which has led us to realise that the ice-covered polar oceans are critical for the climate of our planet.

He described the polar seas, how they work, and their global importance. He showed how research has fed into polar broadcast and how using the series co-produced by the BBC and The Open University, we can teach science to millions. Components of our television broadcast with real time polar data, can even be utilised by distance learning students to learn basic science and get the best possible understanding of what is happening there right now.