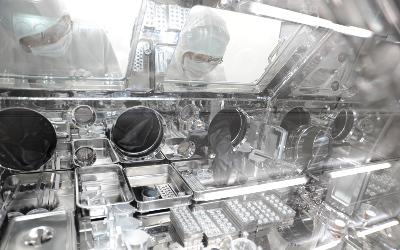 New research findings have provided important new clues as to how the inner Solar System, including Earth, acquired its water and organic-rich components - the essential building blocks for all life.

The Kochi Team, supported by researchers at the OU and UCLA, USA and led by Motoo Ito of JAMSTEC, have undertaken a detailed study, published in Nature Astronomy, of eight particles returned to Earth from asteroid ‘Ryugu’ by the JAXA spacecraft Hayabusa2.

Experts from the OU undertook oxygen isotope analysis on samples from Ryugu using data that was a critical component in establishing the links between the returned asteroid materials and the existing meteorite record.

Based on spacecraft data it was previously thought that the Ryugu material had experienced high temperatures and that most of the water it contained had been driven off because of this. This theory was discovered to be wrong.

In fact, the material contains a lot of water and organic matter, and OU experts were able to confirm that the Ryugu samples are very similar to meteorites of the CI (Ivuna-type) chondrite group. These are the most important single meteorite group because they have a composition that matches that of our Solar System. They were also able to show that CI chondrites have been contaminated by their interaction with the terrestrial environment.

Because the Ryugu samples were collected and returned to Earth in ultra-clean conditions they are the most pristine, primitive Solar System samples that we have.

Richard Greenwood is a Research Fellow at the OU and supported the study through isotope analysis. Dr Greenwood explained the importance of the research:

“When Asteroid Ryugu was surveyed in space by the Haybusa2 spacecraft it looked as though the results from the mission might be a bit disappointing. It seemed that materials from which the asteroid was composed had been heated to a high temperature and much of the water stored in them had been lost to space.

"However, while working as part of the Japanese Kochi Team, OU scientists were able to demonstrate that the Ryugu samples were closely similar to the important and unheated CI (Ivuna-type) chondrites. These are materials which have a composition that closely matches that of the Solar System itself, including the Sun. For understanding the chemistry of the Solar System it turns out that the Ryugu materials are more precious gold dust."

Despite the material from Ryugu being aqueous (of or containing water), low temperatures mean the primary relationships between its minerals and the organic component have been preserved. Isotopic evidence (hydrogen and nitrogen) indicates that the fine-grained minerals and organics seen in the Ryugu particles formed in the outer Solar System.

Because of this study, experts have been able to conclude that materials in primitive asteroids may have acted as ‘cradles’ for organic molecules. This would have helped to preserve them and so provides a potential mechanism for the coupled delivery of water and organics to the early Earth.