Our interest is in studying volatiles in the solar system (water, organics, and planetary atmospheres) to discover conditions and processes occurring in the early solar system.

We develop miniature mass spectrometers to fly on space missions to measure the chemical and isotopic composition of volatiles.

The control and handling of volatiles may also be useful for human space exploration where volatiles such as water, oxygen or carbon dioxide can be harvested in situ rather than transported at high cost from Earth.

As well as space missions, the group is actively involved with projects back on Earth making use of technology developed and expertise gained through space research. 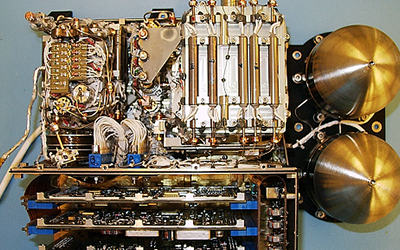 Ptolemy was one of eleven instruments on the Philae Lander as part of the ESA Rosetta mission. It is a 4.1 kg Gas Chromatography – Mass Spectrometer designed to measure the chemical and isotopic composition of a comet, built in collaboration with RAL Space. The Rosetta mission was launched on 2nd March 2004 and toured the solar system for over 10 years with a Mars and two Earth gravity assists and two asteroid flybys to reach its target comet 67P/Churyumiv-Gerasimenko in August 2014. During the journey Ptolemy was operated, along with other Rosetta instruments, to search for an exosphere around Lutetia as the spacecraft flew by at a distance of 3000 km and velocity of 15 km s-1.

The Philae landing on 12th November 2014 didn’t go according to plan with Philae failing to anchor itself to the comet and bouncing for 90 minutes before finally coming to rest. Despite the ‘non-nominal’ landing, Ptolemy operated, as planned, 20 minutes after the initial contact and measured the composition of the comet dust and gas kicked up by the impact. Further operations followed for three days, along with all the other lander instruments, until the batteries were exhausted and Philae entered hibernation.

Highlights of the Ptolemy results

Research is continuing at the Open University, analysing chemicals thought to be on the comet using the flight spare Ptolemy instrument to compare with the results made by Ptolemy.

ProSPA is a mass spectrometer system being developed for ESA to fly on the Russian Lunar27 mission in 2020. The lander will land close to the Moon’s South Pole and drill for samples at up to 2 m depth. Samples are heated by ProSPA to release volatiles for analysis by the mass spectrometers. The aim of the instrument is to determine the quantity of volatiles and their isotopic composition to gain knowledge about their origin, concentration mechanism and total abundance for potential use as an in situ resource. One part of the instrument is dedicated to demonstrating in situ resource utilisation by heating up a sample in the presence of hydrogen to produce water.

MEMS (MicroElectroMechanical Systems) are devices using the technology of silicon wafers to build small systems. The aim of the MEMS GC-MS project is to build components for a miniaturised mass spectrometer system on a chip. This is an ESA contract for applications on future Mars missions. The MEMS components are:

The group is involved with proposals for future space missions. For the current ESA M5 call we are supporting the HERA and Castalia missions.

HERA is a Saturn Atmosphere Entry probe. Similar to the Galileo probe to Jupiter, the HERA probe will use a heat shield to slow down its entry into Saturn’s atmosphere and then float down on parachutes to an atmospheric depth of 10 bar. Absorbent material will be used to concentrate some gases so that their isotopic composition can be measured by the mass spectrometer.

Castalia is a mission to a Main Belt Comet (133P/Elst-Pizarro). Main Belt Comets are objects in the asteroid belt that exhibit comet like behaviour. During the mission the spacecraft will hover above the active region and use an absorbent phase to collect the gases, expected to be mainly water vapour. Once the spacecraft is away from the asteroid, the sample can be heated to release the collected gases for isotopic analysis. The aim is to measure the hydrogen and oxygen isotopic composition of the water and compare this with the isotopic composition of Earth’s water. The Rosetta mission discovered that the hydrogen isotopic composition of the comet’s water was four times that of Earth’s, showing that comets from the outer solar system were probably not a significant source of Earth’s water – maybe Earth’s water originated in the asteroid belt.