Asteroid is officially named after The Open University 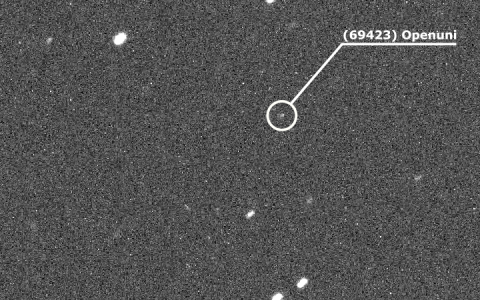 Academics in the School of Physical Sciences are celebrating after learning that an asteroid situated more than 126 million miles from Earth has finally been named after The Open University.

Two years ago, professors Simon Green and Andrew Norton set out to name asteroid number 69423 ‘Openuni’ in celebration of the 50th anniversary of the OU’s creation on 23 April 1969.

Academics have now heard that the Working Group for Small Body Nomenclature (WGSBN), part of the International Astronomical Union, has officially ratified the name.

The WGSBN’s acceptance and confirmation of the name is deeply meaningful for the OU, which has a long and illustrious history of space science research.

Only one other UK university has succeeded in having one of the 1.1 million known asteroids named after it: Aberdonia, named after the University of Aberdeen to celebrate its 500-year anniversary in 1995.

“Openuni is in the inner part of the asteroid “Main Belt”, which lies between Mars and Jupiter. Its average distance from the Sun is 235 million miles but because of the orbit it is in, this asteroid will get no closer than 126 million miles from Earth.”

Andrew Norton, Professor of Astrophysics Education, said while it can be seen through a telescope it can only be seen as a faint point of light in the sky and it is believed to be about three kilometres across.

He says scientists have come to that conclusion over time, since it was discovered in 1996 at the Italian observatory, Farra D’Isonzo. Experts measure the asteroid’s reflected light as it moves in its orbit. It means we are unlikely to ever know its precise shape.

“It’s probably a fragment of a larger asteroid, a planetesimal, one of the building blocks for a planet prevented from forming between Mars and Jupiter because of the gravitational pull of Jupiter.

“That larger asteroid would have been broken up by a collision with another asteroid, most likely not long after the formation of the solar system, so we know it’s probably about 4.6 billion years old, just like every other asteroid.”

But there is little chance of human technology ever getting close to it. Simon added: “The most efficient, lowest-fuel trajectory for a conventional rocket would take more than two years to travel there.

“Expending more fuel would reduce the travel time but, practically, it would still take more than a year. For comparison, if it was possible for an airliner to travel into space, it would take about a century to reach it, and there is no particular reason to go to this otherwise rather ordinary asteroid.”

Most asteroids lie in the “Main Belt” between Mars and Jupiter, which is a relatively stable environment. There are fewer than 100 asteroids in the belt that are 100 kilometres across or larger.

The asteroid that hit the Earth 66 million years ago, and is believed to have caused the extinction of the dinosaurs, ending their 180-million-year reign, was probably 10-15 kilometres across. Its high-impact velocity with the Earth caused a crater 150-kilometres wide and the worldwide devastation that ensued.