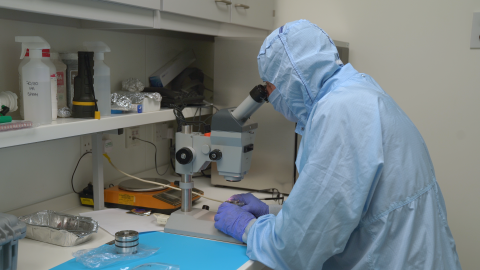 Asteroids often get a bad press. Not surprising really as scientists think that a 10 km wide space rock that hit Earth 66 million years ago was responsible for the extinction of the dinosaurs, and lots of other species too. And as portrayed in the popular TV show Don’t Look Up there is always the chance that it could happen again, with potentially devastating results for mankind.

Just one more thing to worry about? Well there is another side to asteroids.

Just after its formation, the inner part of the Solar System, where Earth hangs out, was likely a hot and lifeless desert.  Asteroids may have changed all that. It has been proposed that wet asteroids from the outer Solar System were flung inwards by Jupiter and so brought water and essential ingredients for life to the early Earth.

Such organic-rich, hydrated asteroids have a very dark appearance and are referred to a C-types. This is because they are likely carbon-rich. Occasionally some material from C-type asteroids lands on Earth as meteorites. But more often, because they are so soft and crumbly, such fragments are destroyed as they plunge through Earth’s atmosphere. The Winchcombe meteorite that fell in Gloucestershire at the end of February 2021 would originally have been a part of a larger C-type asteroid.

But waiting for meteorites to arrive on Earth is not the best way to study C-type asteroids. Far better to go and visit one. And that is exactly what the Japanese Space Agency JAXA did with their Hayabusa2 spacecraft. Launched in December 2014, it reached the C-type asteroid 162173 Ryugu in June 2018. For the next year and a half it studied the asteroid in great detail and even collected two surface samples. It left Ryugu in November 2019 and returned a sample canister to Earth on 5th December 2020. Inside was 5.3 g of ultra-clean asteroid dust. The canister was safely recovered in the Australian desert and transported to Japan for detailed scientific studies.

And that is when scientists at the Open University got involved. Dr Richard Greenwood was invited to become a member of the Kochi Hayabusa2 team by its leader Dr Motoo Ito. The Open University are world leaders in using oxygen to fingerprint extraterrestrial rocks. So last summer a few tiny grains from Asteroid Ryugu arrived at the OU’s Milton Keynes Campus and the whole oxygen isotope team got to work. Team members Dr Richard Greenwood, Professor Ian Franchi, PhD student Ross Findlay and technician James Malley made detailed measurements of these precious grains.

The results from the study of Ryugu fragments, including those from Team Kochi and the Open University, have been astonishing. It turned out that Ryugu was much richer in water and organic compounds than had been expected on the basis of the spacecraft observations. The asteroid is similar to one of the rarest and most precious group of meteorites that arrive on Earth. The work at the Open University in particular was able to match Ryugu to these rare meteorites and also show that they had become contaminated very rapidly after entering Earth’s atmosphere. On the other hand, Ryugu particles, which were collected in very clean conditions are almost pristine.

The continuing work on these precious particles will help us to understand how the building blocks for life first arrived on Earth. It turns out that we may owe a lot to these dark asteroids. In fact we wouldn’t be here without them.