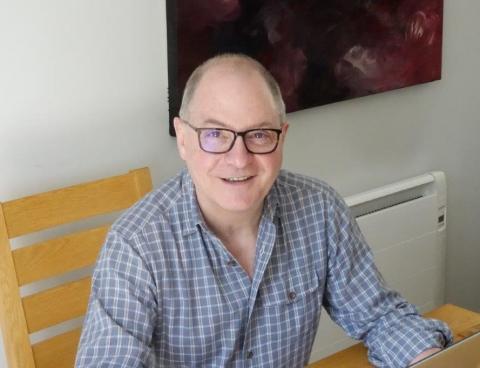 Each year the OU awards a prize to the top performing student(s) in level 2 Astronomy (S284) and level 2 Planetary Science (S283), funded by a gift bequeathed by Eric Tomney, an OU graduate and life-long learner, who was also an enthusiastic astronomer.

This year the Astronomy prize was shared between two excellent S284 students, Mr Dax Godderidge and Mr Tony Anderson. The Planetary Science prize was awarded to S283 student, Anthony Lawrinson. Their stories are all very different, but just show the diversity of OU students, the challenges they face, and the opportunities OU study opens for them.

Dax was keen to re-enter university as a mature student having previously studied chemistry in a more traditional environment graduating in 1993. Dax is studying the S10 Certificate in Astronomy and was attracted to the OU because our modules are ELCAS accredited. When asked how he felt when he heard he had won the prize, Dax said:

"Genuine surprise and a sense that I had realised a level of academic ability that my peers and tutors could not tease out of me in my youth, despite their best efforts. On reflection I lacked maturity and the ability to apply myself [when I was younger]. Winning this prize has given me a degree of closure on poor performance all those years ago, proving that learning really is a life-long activity should you desire it to be."

Dax didn't necessarily intend to do other modules beyond those in the Certificate in Astronomy, but his positive experience and recent success with the OU has ignited his desire to take his studies further, as well as boosting his confidence. He says he thinks this might involve awakening long dormant maths skills, perhaps studying with the OU at level 3 Astronomy and aiming towards an Astronomy Masters.

Beyond his studies, Dax enjoys reading science and science fiction and rather hoped his studies would provide him with complex answers to simple science questions – in fact though he may not yet have all the answers – he would wholeheartedly recommend S284 to anyone with a genuine interest in the stars and says the module pushed him out of his comfort zone, but by committing time to do as well as he could in the assessments, he built himself a solid foundation of marks, which contributed towards his success in the final exams, and his prize announced here.

Tony once studied Linguistics with German many, many years ago, at a traditional university, then started studying with the OU some years ago, but was forced to defer for a while, like many OU students, due to his work commitments. However, as he reached retirement (he was formerly a self-employed tourist guide) he started his studies again, spurred on by the intellectual stimulation, especially since he missed the continual life-long learning that had always been part of his tourist guide role. When Tony was asked for his reaction to winning the prize he said:

"Oh, amazed! Elated and pretty much dumbstruck. Having enjoyed the course so much, having been fascinated so much by the material, it was a truly brilliant added bonus."

Tony didn't have any qualification in mind when he started his OU studies, and therefore has taken modules that interest him, and is working towards an Open Degree. He weaved his way to Astronomy via a Science foundation module, and then Medieval to Modern England, Europe 1914-1989 (both history modules). He's studying now for the pleasure of it, and thinks he can never give it up - perhaps like Dax focusing towards a Masters in Astronomy next.

Tony thought S284 was "really good". He highlighted the online video tutorials, saying he loved the content delivered by the module team, Prof Andrew Norton and Dr Helen Fraser, because it opened up each topic, explaining difficult issues, and included Dr Judith Croston running through calculations in detail. He felt much more engaged and invested in the module because he had “met” the academics, and could put faces to the names he saw on the module forums. Like Dax, tony would "without a doubt" recommend S284 to other OU students. He said:

"S284 was really well structured and has been very well planned and pitched at just the right level throughout. The tutor support is excellent, and the resources well thought out."

Even so, Tony admits the likely secret to his success was making notes as he worked online, and then writing those notes up. It meant he almost worked through the material twice (or sometimes even a few more times), and he was able to make sure he understood everything before moving on to the next section.

Anthony “just” studies with the OU for fun! He is now retired, although he still has children at home, but has always had a wide range of interests and a motivation for life-long learning. When he heard he had been awarded the prize he said:

“Gosh, thank you!  Not something I expected to be anywhere near in with a chance for - there have been so many smart people on the [S283] forums!  I guess 40+ years of practise gave me a tiny edge with the exam technique!”

Anthony has never viewed studying as a chore, provided it’s a subject you get to choose and one of course you like. He was not retired when he first started studying with the OU, and used to use a multitude of long-haul flights to complete his work, so it’s probably not surprising that the flight-attendants (and his boss) found it funny that he enjoyed 12 hours of maths “as a relaxation” from work, on one flight to Hong Kong.

Anthony admits the last year has been challenging with COVID-19 restrictions, some personal health challenges, and having to come to terms with the “as far as we know” non-definitive, nature of some areas of planetary science. However, he admits the latter is what made studying planetary science most interesting – it felt like he was working at the forefront of knowledge. Next Anthony just wants to keep studying and having fun, sharing his new knowledge, especially with his children.

Anthony very kindly donated his prize to his local school, which is a science specialist academy, and hopes he will soon be able to meet the OU academics in person, as well as visiting the OU’s George Abel Observatory – once the pandemic allows.

“His exam result was truly outstanding, and extra congratulations are due to Anthony who achieved this whilst facing some personal health challenges, and emerged as the top performing student regardless. Very well done”.

"All the S284 students performed well this year, but Dax and Tony 's results were outstanding. Their award of the Eric Tomney Prize is richly deserved, not least because they both were active participants on the module forums, and in supporting their peers all year long.

It seems though that Anthony is joining S284 in October – so watch out – he may just be aiming to win the astronomy prize next year too! I really look forward to having Anthony studying with us, and wish Dax and Tony the very best in their next endeavours. "

Photo: Mr Tony Anderson, one of the Astronomy prize recipients.

Follow these links, if you would like to study Astronomy or Planetary Science with the Open University