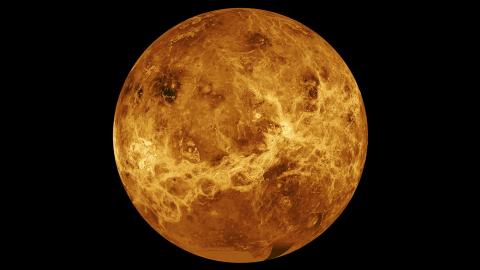 Scientists from across the globe, including Dr Helen Fraser of The Open University, have detected a rare gas – phosphine – in the clouds of Venus. The landmark discovery could point to extra-terrestrial ‘aerial’ life on the planet.

For decades, the scientific community has speculated that high clouds on Venus could offer a home for microbes – floating free of the scorching surface, but still needing to tolerate very high acidity. The finding suggests that Venus could host unknown photochemical or geochemical processes. On Earth, phosphine, which consists of hydrogen and phosphorus, is predominately made industrially or by microbes that thrive in oxygen-free environments.

Dr Helen Fraser, astrochemist and senior lecturer at The Open University, said: “We have scratched the surface of something really exciting. By combining our expertise as chemists, astronomers, biologists and geologists, we move ever closer to answering the question: is there life in the universe? And, perhaps even more tantalising, is there life beyond Earth in the Solar System?”

The team, led by Professor Jane Greaves of Cardiff University, initially made the discovery using James Clerk Maxwell Telescope (JCMT) in Hawaii. Thereafter, they confirmed the research findings using the Atacama Large Millimeter/submillimeter Array (ALMA) in Chile. Both facilities observed Venus at a wavelength of about 1 millimetre, much longer than the human eye can see – only telescopes at high altitude can detect this wavelength effectively.

They detected a spectral signature that is unique to phosphine and estimated an abundance of 20 parts-per-billion of phosphine in Venus’ clouds. Professor Greaves said: “This was an experiment made out of pure curiosity, really – taking advantage of JCMT’s powerful technology, and thinking about future instruments. I thought we’d just be able to rule out extreme scenarios, like the clouds being stuffed full of organisms. When we got the first hints of phosphine in Venus’ spectrum, it was a shock!”

The team investigated different ways the phosphine may have been produced, including from sources on the surface of the planet, micrometeorites, lightning, or chemical processes happening within the clouds. Dr Helen Fraser, adds:  “Understanding the sources of phosphine in a Venusian environment was hard. We first identified from further research that the source, if similar to the gas found on Earth, would have to be from soils or to be exact microbes in soils. Alternatively, could be due to the breakdown of artificial materials like concretes - neither seemed likely on Venus – so we needed quite some chemical modelling to rule out many different possibilities.”

Natural sources were found to make at most one ten thousandth of the amount of phosphine that the telescopes detected. To create the observed quantity of phosphine on Venus, terrestrial organisms would only need to work at about 10% of their maximum productivity, according to research findings. Any microbes on Venus will likely be very different to their Earth cousins though, to survive in hyper-acidic conditions. The team believes their discovery is significant because they can rule out many alternative ways to make phosphine, but they acknowledge that confirming the presence of “life” needs a lot more work. Although the high clouds of Venus have temperatures up to a pleasant 30 degrees centigrade, they are incredibly acidic – around 90% sulphuric acid – posing major issues for microbes to survive there.

The team are now eagerly awaiting more telescope time, for example to establish whether the phosphine is in a relatively temperate part of the clouds, and to look for other gases associated with life. New space missions could also travel to our neighbouring planet and sample the clouds in situ to further search for signs of life.

For more on the research findings, read the paper published in Nature Astronomy. There is also an article by Professor Monica Grady in The Conversation discussing more about the finding.