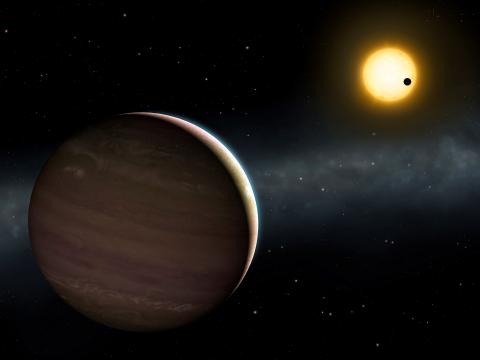 An international team of scientists, including Dr Ulrich Kolb and Professor Carole Haswell of The School of Physical Sciences at The Open University (OU), have discovered two, giant planets interacting near each other, in a gravitational dance. The planets, detected by the Wide Area Search for Planets (WASP) project, feel each other’s gravity and, as a result, speed up and slow down slightly as the inner, faster-orbiting planet overtakes on the inside. The first planet, WASP-148b, passes in front of its host star and completes an orbit every 8.8 Earth days. The second planet, WASP-148c, takes about four times longer to complete an orbit.

The planets’ interaction with each other causes the transit timing of WASP-148b to vary, so it sometimes occurs early and sometimes late. These variations from the usual orbital clockwork have been measured, for the first time, with telescopes on Earth rather than with space telescopes. Professor Carole Haswell, Head of Astronomy at The Open University, said: “Exoplanet research at The Open University began when we joined the WASP consortium over 15 years ago. It has been a very exciting and productive project, and this latest discovery is one of the best!”

WASP detects planets that pass in front of their host star, which causes a small dip in the star light because the planet blocks a fraction of the star’s surface from our view during the “planetary transit”.

Dr Guillaume Hébrard, of Institut d'astrophysique de Paris (IAP), who led the discovery, said: “WASP has discovered over a hundred transiting giant planets, but this double discovery has more than double the value because of the extra information the timing variations give us.”

Before this discovery a few dozen planetary systems showed transit timing variations had been detected, all with space telescopes. Professor Andrew Collier Cameron, of the University of St Andrews and WASP team member, said: "This is the first time we’ve found a pair of giant planets interacting so closely, and it’s exciting to be able to follow their dance from the ground." 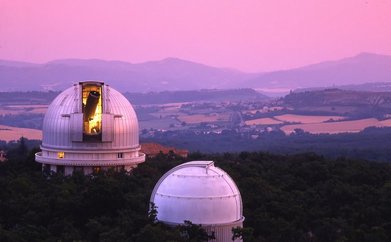 WASP-148b was identified using the SuperWASP instrument, an array of small camera lenses, installed at the Roque de los Muchachos Observatory in La Palma, Canary Islands. From 2014, the host star was observed with the SOPHIE high-resolution spectrograph at the Observatoire de Haute-Provence, France. SOPHIE was used to make accurate “radial velocity” measurements, revealing the small variations in the star’s velocity due to the presence of exoplanets orbiting around it. WASP-148b is about the size and mass of Saturn with an orbital period of 8.8 days. SOPHIE’s observations also directly revealed the second planet WASP-148c, with a mass half that of Jupiter and an orbital period of 34.5 days. 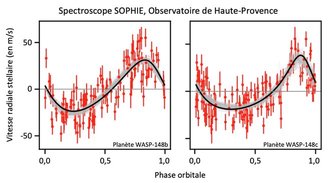 Image 2: Radial velocity measurements (in red) of the WASP-148 star captured with the SOPHIE spectroscope. Credit: G. Hébrard et al. They show the variation of the stellar velocity due to planets WASP-148b (left) and WASP-148c (right). The black lines represent the theoretical model fitting the measurements.

The orbital period of WASP-148c is approximately four times that of WASP-148b and, as a result, the gravitational interactions produce large timing variations. The gravity acts similarly to pushing a child on a swing: by always adding a force at just the right time, the effect is amplified. This is called resonance. For WASP-148b the transit timing variations are as much as 15 minutes, which is easy to measure. The timings were detected using small telescopes: Nites, Carlos-Sánchez, and Liverpool telescopes in the Canary Islands and the Hubert-Reeves amateur observatory, in Ardèche, France.

Professor Don Pollacco, of the University of Warwick and principal investigator of the WASP project, said: “Even in this era of very expensive space telescopes, small telescopes on the ground can make vital contributions”.

Dr Ulrich Kolb, of The Open University and WASP team member, added:  “Our remotely-operated OpenScience Observatories are used by our students to make measurements like this, and it’s even available to be used by members of the public.”

For more on the research findings, read the paper published in the Astronomy & Astrophysics journal.

The OpenScience Observatories are small telescopes owned and operated by The Open University. They can be accessed via the website telescope.org and members of the public can gain free access to them via our Badged Open Course.

Image 3: Example of transits from the planet WASP-148b. Credit: G. Hébrard et al. Each point indicates the amount of light measured from the star. The black line represents the theoretical model. A small dip in this light curve is observed when the planet WASP-148b passes in front of its star.