At the recent Royal Astronomical Society’s National Astronomy Meeting, Open University PhD student Helen Usher presented details of the work undertaken by a group of primary schools in South Wales to observe and measure an asteroid which has developed an unusual long tail, which is very rare behaviour normally only associated with an icy comet.

Asteroid 2005 QN173 recently began to develop a tail and is being studied with great interest by professional and amateur astronomers around the globe. 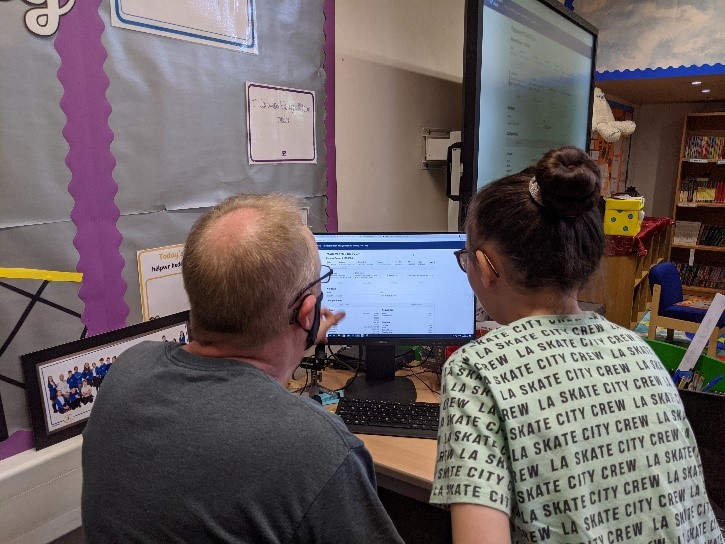 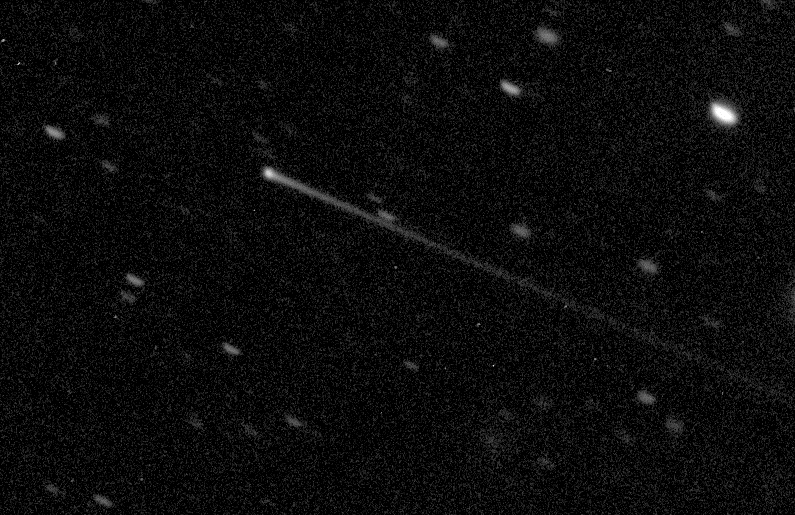 Picture: One of the images obtained by the Comet Chaser schools using the 2-metre Faulkes Telescope North, showing the impressive tail of active asteroid 2005 QN173.

With help and guidance from Tony Angel and Richard Miles (Royal Astronomical Society and British Astronomical Association) and their teaching assistant, amateur astronomer Ben Wooding, the pupils from St Marys school analysed the images to measure the position of the asteroid and its brightness. Measurements were then sent to the Minor Planets Center in the USA, which calculates the orbits of asteroids and comets and monitors their activity.  The children were very excited about being able to help astronomers study this bizarre object! These measurements were submitted less than a week after the comet community was asked to make observations to help study this unusual object.

“Comet Chasers is exactly the sort of thing the Faulkes Telescope Project was set up to do – we can put school pupils in direct control of a multi-million-pound telescope and, with the guidance of keen amateur and professional astronomers, they can really help contribute to astronomical research – and have great fun at the same time!” said Prof. Roche, the Director of the Faulkes Telescope Project and an astronomer at Cardiff University.

Tony Angel, an amateur astronomer now based in Spain said “I have always enjoyed being involved in ProAm projects. Comet Chasers is about passing our knowledge on and bringing the wonders of astronomy to children. I think this is a very important role for us as RAS Fellows. Hopefully it will lead to some of these children becoming astronomers.”

Helen Usher, a PhD student at the Open University studying Rosetta’s Comet (67P), said “ It has been fantastic to lead the Comet Chasers project working with the Faulkes Telescope Project.  I have really enjoyed bringing real comet science, my love of the Rosetta Mission, and the wonder of astronomy too, to over 100 primary school children in my local area.  I am particularly pleased that schools are keen to carry on in the next school year.  Comet 67P gets close to the Sun again in early November, so I’m looking forward to schools helping my research by observing, measuring and monitoring it with me through the Autumn.”

Background - the asteroid with a tail:

An object originally discovered in 2005 as a main-belt asteroid has very recently been found to be displaying a comet-like tail, one that is unusually long and straight. Found by Nicolas Erasmus of the South African Astronomical Observatory whilst inspecting ATLAS survey images taken from Haleakala, Hawaii, 2005 QN173 represents a very rare class of object, the true nature of which is yet to be identified.

Alan Fitzsimmons, one of the ATLAS team, has commented that this active asteroid might belong to a group of objects termed the main-belt comets or MBCs given that its orbit is similar to that of an MBC and that it has become active near perihelion. However, there is no evidence of a secondary tail indicative of cometary volatiles and so we may be looking at an asteroid that has been disrupted by collision with some smaller body, or through its spin rate gradually increasing until it exceeds the disruption limit whereby self-gravity and cohesive strength are not sufficient to hold itself together.

The exciting finding on images taken on 2021 July 7.6 was reported by Alan Fitzsimmons on a note to mailing lists on comets and minor planets on July 9 and Helen Usher of Comet Chasers was able to request observations on 1.0-m and 2.0-m telescopes the same day using the Las Cumbres Observatory network. In fact, the first images were obtained less than 3 hours after Alan’s note was sent out using the 2.0-m Faulkes Telescope North. This telescope sits alongside the 0.5-m ATLAS survey telescope located around 3055 m high on Haleakala, Hawaii and because of its autonomous robotic operation is especially useful for fast follow-up of interesting new discoveries.  Over the next few days, schools from the Comet Chasers project made more observations, and have scheduled more over the coming days too.

2005 QN173, which is now the focus of attention from comet and asteroid astronomers alike, has also received an official number, namely (248370). The above image shows its current very unusual appearance. More observations are strongly encouraged especially using larger telescopes under good seeing conditions. If the object has disrupted as a result of its fast spin rate, we may be able to analyse images of the residual body using photometry to see if we can measure and confirm its short rotation period, which would be expected to be around 2.5 hours. First, we need to let any surrounding debris field close to the main body to dissipate. We can also look for evidence of volatiles emitted from the object, e.g. a secondary tail or coma, although it is thought that the asteroid became active many months ago so that volatiles may by now have dispersed.

The ‘Comet Chasers’ project is funded by STFC, administered by Techniquest, and delivered by a partnership of the Faulkes Telescope Project, Cardiff University, an Open University PhD student, educators, and amateur astronomers from the Royal Astronomical Society and the British Astronomical Association. It is a pilot project working with primary schools in South Wales.