A team of UK scientists, guided by meteor specialists, have recovered pieces of an extremely rare meteorite, a type which has never fallen anywhere in the UK before 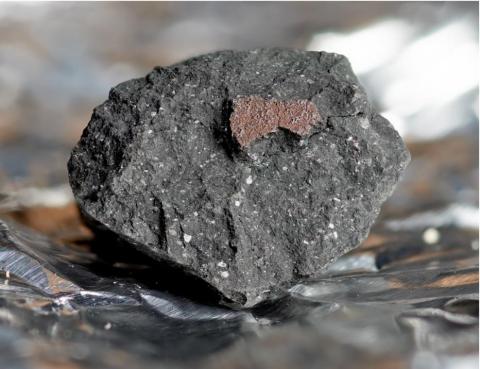 In a major event for UK science, the meteorite that fell from the fireball that lit up the sky over the UK and Northern Europe on Sunday 28 February, has been found.

Almost 300g of a very rare meteorite, known as a carbonaceous chondrite, survived its fiery passage through the Earth’s atmosphere and landed on a driveway in the small Cotswold town of Winchcombe. Other pieces of this exceptional meteorite have now been recovered in the local area. Specialised cameras across the country as part of UKFAll were able to recreate the flight path, allowing scientists to determine exactly where in the solar system it came from, and predict where it fell. The original space rock was travelling at nearly 14km per second before hitting the Earth’s atmosphere.

The meteorite was retrieved in such a good condition, so quickly after its fall, that it is comparable to the samples returned from space missions, both in quality and quantity.

Dr Ashley King, UK Research and Innovation Future Leaders Fellow in the Department of Earth Sciences at the Museum, was among the first on the scene when the meteorite was discovered on Wednesday and has been advising on the handling and care of the meteorite since. He says, ‘Nearly all meteorites come to us from asteroids, the leftover building blocks of the solar system that can tell us how planets like the Earth formed. The opportunity to be one of the first people to see and study a meteorite that was recovered almost immediately after falling is a dream come true!’

Dr Richard Greenwood, Research Fellow in Planetary Sciences at the Open University was the first scientist to identify and advise on the meteorite. Dr Greenwood says ‘I was in shock when I saw it and immediately knew it was a rare meteorite and a totally unique event. It’s emotional being the first one to confirm to the people standing in front of you that the thud they heard on their driveway overnight is in fact the real thing.’

Once the meteorite was identified as genuine, plans were made for it to be safely moved to the Museum where it will be properly cared for until it begins an official process of classification to establish its validity and scientific significance.

A first for UK science

A victory for UK citizen science, the fireball was seen by thousands of eyewitnesses across the UK and northern Europe, many of whom reported it to the UK Meteor Observation Network, and was captured on many fireball cameras and home surveillance cameras when it fell to Earth at 21:54 on Sunday 28 February.

Meteorites are incredibly old – their age of about 4567 million years is much older than any rock from the Earth. Almost all these “space rocks” have been blasted off asteroids, and travel for many thousands of years through space before being captured – usually by the Sun, but occasionally by Earth. They travel through the atmosphere, sometimes – like the one that fell in Gloucestershire – producing a bright fireball before landing on Earth. Over 1000 meteorites the size of a football are believed to fall to Earth every year, however it is very rare for any of them to be seen to fall and recovered.

Carbonaceous chondrites, like the one just discovered, are made of a mixture of minerals and organic compounds – including amino acids. They are the most primitive and pristine materials of the solar system and can provide unique information on where water and the building blocks of life were formed and what planets are made from - some of the biggest questions asked by the scientific community.

Prof Sara Russell, Merit Researcher in Cosmic Mineralogy at the Museum advised on the care of the meteorite once it was located. Prof Russell says, “The Japanese space mission Hayabusa2 returned around 4.5 g of fragments from asteroid Ryugu to Earth in December last year, and at the Museum we are helping to characterise this material. The Winchcombe meteorite fall is very timely as the rock is similar to Ryugu in many ways, and we can use the meteorite to rehearse for mission analyses.”

Jim Rowe of UKFAll, a collaboration between the UK’s meteor and fireball camera networks, said ‘Three years ago a meteorite fell in Dorset. Back then we had good data but no action plan. So, we set up UKFAll, and this is the outcome! Each of the six UK meteor camera networks contributed data as did three international teams who analysed the data, so it’s been a real global collaborative effort tracking down this important meteorite.’

Dr Luke Daly from the University of Glasgow co-leads the UK Fireball Network, part of UKFAll and the Global Fireball Observatory, commented that “It’s thanks to this international collaboration, including researchers as far away as Australia, that we were able to calculate where this meteorite landed so quickly and with such accuracy, as well as where it originated from in the asteroid belt, a rarity that can be said of only about 40 of the 65,000 meteorites on Earth. Goodwill and teamwork have produced a stellar result.”

The team believe that more fragments may yet be discovered. This fragile meteorite may be found as black stones, or as piles of tiny rock or even dust. If you are local to the area and find something that could be meteorite, please be sure to take a photo of it and record its location, before collecting the sample using a gloved hand or in aluminium foil and contacting the Natural History Museum. However, please respect local lockdown COVID-19 regulations.

About the Natural History Museum:

The Natural History Museum is both a world-leading science research centre and the mostvisited natural history museum in Europe. With a vision of a future in which both people and the planet thrive, it is uniquely positioned to be a powerful champion for balancing humanity’s needs with those of the natural world.

It is custodian of one of the world’s most important scientific collections comprising over 80 million specimens. The scale of this collection enables researchers from all over the world to document how species have and continue to respond to environmental changes - which is vital in helping predict what might happen in the future and informing future policies and plans to help the planet.

The Museum’s 300 scientists continue to represent one of the largest groups in the world studying and enabling research into every aspect of the natural world. Their science is contributing critical data to help the global fight to save the future of the planet from the major threats of climate change and biodiversity loss through to finding solutions such as the sustainable extraction of natural resources.

The Museum uses its enormous global reach and influence to meet its mission to create advocates for the planet - to inform, inspire and empower everyone to make a difference for nature. We welcome over five million visitors each year; our digital output reaches hundreds of thousands of people in over 200 countries each month and our touring exhibitions have been seen by around 30 million people in the last 10 years.

About the UK Fireball Alliance:

The UK Fireball Alliance aims to recover freshly fallen meteorites in the UK. Led by volunteers and by staff of the Natural History Museum, UKFAll is a collaboration between the UK’s six meteor and fireball camera networks.  The networks are:

•The UK Fireball Network, run by a team from Imperial College London and the University of Glasgow, supported by funding from the Science and Technology

Facilities Council and the Australian Research Council, is part of Australia’s Curtin

University-led Global Fireball Observatory operated by the Space Science and Technology Centre in collaboration with NASA and 18 international partners;

•SCAMP, the UK part of the France-based FRIPON fireball network, which was funded by ANR in 2014 and now comprises 175 cameras and 25 radio receivers;

The Winchcombe fireball was recorded by all six networks from locations as far away as the Netherlands and Wales. Trajectory and strewn field analysis was done by researchers from the Global Fireball Observatory at Curtin University in Western Australia, the FRIPON