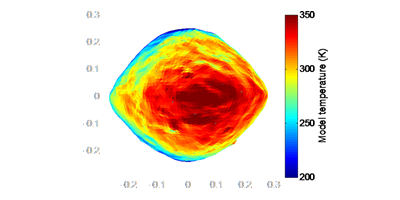 NASA's OSIRIS-REx mission arrived at the 500-metre-sized asteroid (101955) Bennu in December 2018. It's aim is to collect a sample from the surface of Bennu and return it to the Earth so that scientists can study it in the laboratory. This will help scientists determine how the planets formed 4.5 billion years ago, and, potentially, how life arose on Earth. In order to choose a suitable sampling site, OSIRIS-REx must first map the asteroid in detail - a process which began during its approach to Bennu in November/December 2018. The first results from this approach phase are reported in a recent Nature special issue (www.nature.com/collections/osiris-rex). A surprise finding from the approach phase data was that Bennu is covered by lots of large boulders (metre-sized and bigger), and this was surprising because it was previously thought to be covered in centimetre-sized particles. The presence of these large boulders will now make it very challenging for OSIRIS-REx to successfully acquire a suitable sample to return to Earth but the OSIRIS-REx team remain highly optimistic.

Ben Rozitis, a research fellow at the Open University, is a member of the OSIRIS-REx science team and specialises in the temperature mapping and modelling of Bennu. In particular, his work focuses on characterising the physical properties of soil and rocks on the surface of Bennu by looking at their temperature. His analysis of the temperatures on Bennu finds that the large boulders must be rather porous, a bit like pumice stone on Earth. This helps to explain why it was previously thought that Bennu was covered in centimetre-sized particles because these porous boulders have the same temperature as centimetre-sized particles. His work from now on is to help OSIRIS-REx find suitable sampling sites on Bennu by analysing high resolution temperature maps currently being acquired by OSIRIS-REx.

An example temperature map of Bennu made by Ben Rozitis.