Open University (OU) researchers from the School of Environment Earth and Ecosystems in the Faculty of Science, Technology, Engineering and Mathematics, Drs Katrina Nilsson-Kerr (previous OU PhD student), Pallavi Anand (project lead) and Philip Holden, carried out an integrated data-model study to show that differences in the large-scale tropical rainfall pattern, including monsoon, are sensitive to climatic changes, thousands of years ago. 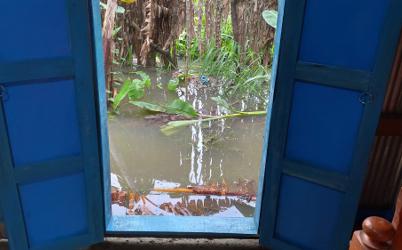 Research findings from the project have been published (“Dipole patterns in tropical precipitation were pervasive across landmasses throughout Marine Isotope Stage 5”) in Communications Earth and Environment (Nature).

The paper provides the first detailed rainfall pattern assessment of the tropical landmasses, including new data for the core Indian Summer Monsoon region, showing extensive presence of contrasting pairs (a ‘dipole’) of tropical rainfall across landmasses in response to climate warming.

The regional differences in rainfall pattern comparison between last interglacial and the Holocene (present one), explain historical biogeographic events such as biological diversification of Amazonia, cave presence in currently arid regions of North America, Arabia and Levant, vegetation and lake system in Sahara, early Human migration out of Africa but shows reduced Asian Monsoon continental rainfall, similar to the future projection, which if true, could have devastating socioeconomic impact on more than half of the global population.

The samples for the study was collected by Dr Anand following an International Ocean Drilling Programme (IODP) voyage to the Bay of Bengal in 2014-15 to better understand historical variability of the Indian Monsoon in response to changing climate. The discovery was made by an international research team, led by OU researchers in collaboration with the British Geological Survey (UK) and Brown University (USA). The project was funded by the National Environment Research Council.

Follow the link to read the news story shared at  https://www.open.ac.uk/research/news/research-shows-how-rainfall-responded-past-climate-change

We are looking for a Research Associate to work within the Floodplain Meadows Partnership team in EEES. The post is fixed-term and part-time.

New research published in the high-profile journal Science has explored the reproductive complexity of plants.