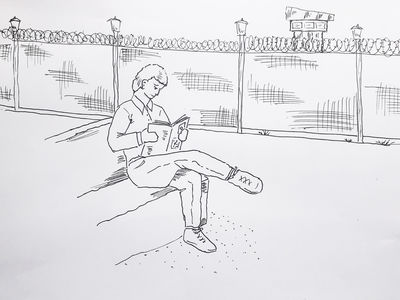 Open University study became a way of life for many of those who studied in the prisons. In his interview Liam McAnoy remembers being attracted to the OU because it was something immediate and relevant to his life in prison at that time. In the first clip on this page Liam describes the visit to prospective new students in the Compounds by Diana Purcell, Open University Senior Counsellor, which inspired him to start his OU studies.

The drawing on this page is by David Symth who studied in the UVF Compounds in the 1980s. He also designed the open book with the key image - used as the main image for the Time to Think collection - to describe what the OU meant to him in prison: "the key to freedom. Both in there and out here." David reflects on this OU study in the Compounds;

It became my way of life. I would certainly get up in the morning and divide the day into two. There was a particular study hut set aside for anybody doing any of the qualifications and I would go out to mid-morning and some years I did two courses, do one course in the morning and then have a slot in the afternoon and go out and do something totally different. And then obviously, as exam times came up, you would have to look to your revision, so I had quite a regime of mental and physical training.

In the H Blocks, OU students in Republican Wings used material from their courses to teach fellow prisoners as part of their Republican education programme. One such course was U221, 'Women's Studies'. In the second clip on this page Laurence McKeown describes arranging with the prison education department for his OU tutor for the 'Women's Studies' course to take evening classes on the subject involving hundreds of men in the Republican Wings.