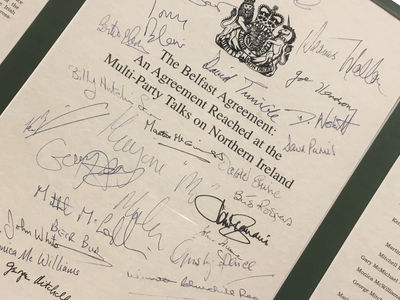 On Good Friday in 1998, an agreement (the Good Friday Agreement) was signed between the British and Irish governments and most of the political parties involved in the conflict in and about Northern Ireland. The peace process leading to this historic agreement "did not just fall off a tree," as Republican Michael Culbert notes. It was the product of many people's efforts behind the scenes over a number of years to bring about change through political means.

Education played a pivotal role in this process. As the Loyalist ex-prisoner William Plum Smith explains, many people "involved in moving the country forward got their education in Long Kesh."

As early as the 1970s, prison was a 'debating chamber' in which ideas and political discussion flourished. In the first audio clip on this page, Brendan Mackin, an Official Republican, describes how studying in the Compounds provided opportunities for conversations across communities, sowing the seeds for future negotiations.

Loyalist Billy Hutchinson was one of the members of the negotiating party and a signatory to the Good Friday Agreement. In the second clip on this page, Billy recalls how study with The Open University in the Compounds in the 1980s helped equip him to negotiate with governments and political opponents during the Northern Ireland Peace Process.

Maintaining the peace is a long and continuous process in which many OU graduates remain active participants.