The Start of the Journey

The historical context of The Open University PhD 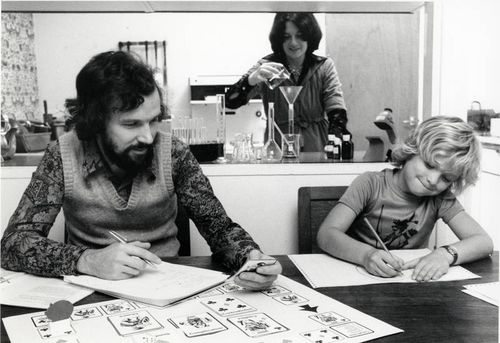 The Open University in the 1970s

In 1969, The Open University was set up in a spirit of positivity and overcoming challenge. With its motto “Learn and Live”, it delivered a revolutionary change for the higher education sector. Championed by Prime Minister Harold Wilson through his Minister for the Arts and passionate OU advocate, Jennie Lee, it led the way in delivering the Labour government policy of improving Britain’s economic future by making higher education available to a greater number and range of people. In the first video clip, Jennie Lee, now Baroness Lee, describes the tough road to setting up the OU. Ironically, its students were fee-paying, and many were in employment and paid tax, so the OU could appeal to a Conservative as well as a Labour vision of the future. Notably, in 1970, Conservative Education Minister, Margaret Thatcher, defied her party’s elitist views of higher education and supported the OU’s low-cost teaching model. At the same time, other parts of the higher education sector were on a journey to minimise traditional higher education elitism, with the increased number of Polytechnics and some technical, vocational universities in the 1960s. (For example; the Universities of Kent, Lancaster, Essex, Sussex and Warwick.)

The Open University went much further, as its distance learning and part-time study model meant students could work at a location and time that suited their lifestyle, many whilst they were in paid employment, domestic work in the home or mature student study, partly due to the fact that initially students were required to be over 21 to study at the OU. The removal of academic qualifications that other universities and polytechnics required to be able to study as an undergraduate, meant that higher education was available to those whose circumstances dictated that A Levels had not been the pathway for them. Students were also not required to take a full degree but could take individual modules if they chose. Women and disabled students of the 1970s were more able to access higher education through the OU than traditional universities. This photograph from the 1970s was devised and created to illustrate how a family could fit OU study into their home life.

Once it opened to students in 1971, the University staff and students were sometimes involved in radically new research projects in leading edge areas of study, like energy technology, climate change, and the Brain Research Group. Staff taught in challenging environments reaching people who may never have had the opportunity to learn without the OU, for example, prisons and psychiatric hospitals, and they spent much of their time in the early years designing the modules of study for OU students from scratch with few benchmarks or templates from which to work. Its progressive, innovative, central location of the new town of Milton Keynes was part of its drive, whilst at the same time, the regional offices meant that staff could support students from all areas of Britain and eventually abroad.  Essential to its core principles, the OUs long association with the BBC delivered many hours of TV and radio teaching, bringing learning into the students’ homes and workplaces. The second video clip on this page shows a short section of one of the first OU broadcasts in 1971.

You can learn more about the history of the OU if you click on this link to The OU Story exhibition.