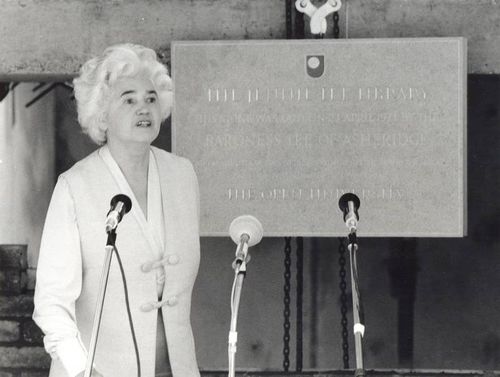 In 1976 Jennie Lee* wrote to renowned sculptor Henry Moore asking if he would consider being the first Honorary President of the proposed International Sculpture Park to be created in Milton Keynes. Moore agreed and promised to donate a generous selection of sculptures on permanent loan. Unfortunately the International Sculpture Park never came to fruition. The letter is held in the Jennie Lee collection in The Open University Archive and an extract from it can be read here:

I have allowed myself to become a Trustee of the Milton Keynes Foundation because of the close association of Milton Keynes with the Open University. Also I very much like the generosity of Evelyn de Rothschild in promoting the idea that Milton Keynes should not make the mistake of concentrating only on houses and factories, but from the beginning should build up some kind of cultural investment.

Greatly daring they are eager to establish an international sculpture park, and of course more than anyone else in the world they would want you to be associated with it...

This project has the blessing of the Development Corporation, who have indeed allocated a magnificent stretch of land in the central area of Milton Keynes for this development...

Would you, dear Henry, allow yourself to become the first Honorary President of this superbly worthwhile project?

The proposed sculpture park and many other early projects feature in artist Gareth Jones’ short film “Looking for Milton Keynes” which was commissioned by The Open University and accompanied an installation he created at MK Gallery in 2011.