Chancellor of the OU 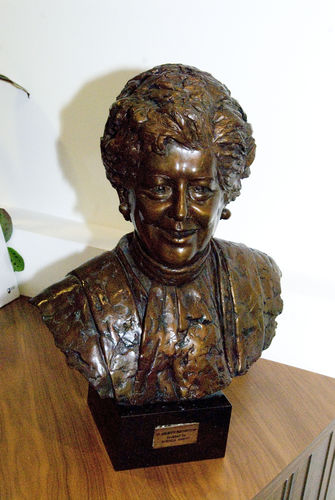 In 1994 it was announced that Betty Boothroyd would be the appointed as the first woman Chancellor of The Open University. The installation took place at Birmingham on 18 March 1995 and part of the ceremony can be viewed on the previous page.

In 2002 Betty took part in a programme called "OU Visitors". The video opposite is a clip from this programme where Betty describes her feelings about being the Chancellor of the OU:

“I want to be associated with [The Open University]… because it reaches people of all backgrounds, all types and sizes and shapes and ages of people. And it takes in people who have probably missed out, like I missed out when I was younger, didn’t get to university. It’s the next best thing that happened to me after being Speaker, I tell you that, I’m very pleased about it”

In her maiden speech in the House of Lords in 2001 Baroness Boothroyd told the House:

“When we in this country embrace a worthy cause, nothing can stop us. The Open University is living proof of that”

In 2001 a bronze bust of Betty Boothroyd was unveiled at the University’s Walton Hall campus to mark her contribution to the OU up until that date. The sculpture by artist Shenda Amery was one of a series of works entitled ‘Women who have made a difference’. The bust is currently displayed in the OU’s main reception building.

In 2003 Baroness Boothroyd was interviewed about writing her autobiography for the OU module A173 “Start writing Family History”:

“I was the first woman Speaker in the history of our country, and I wanted to set that out as to how I got there, and my background, my humble beginnings, and also I was encouraged to do so by a lot of friends who believed that I should write it… I was motivated because I wanted people to know how I became Speaker, and what the life of the Speakership was like.”

You can listen to the audio recording of the interview opposite.