Case Study: Living on the Moon! 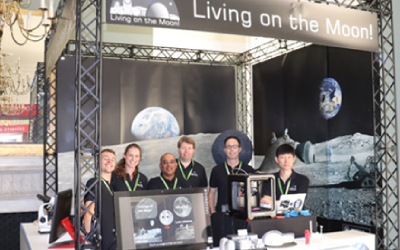 Some of the Living on the Moon! team at The Royal Society

In the summer of 2019, Professor Mahesh Anand led a team of UK lunar researchers from the Natural History Museum, University of Oxford, University of Manchester, and Birkbeck College University of London in putting together a public exhibit for the Royal Summer Science Exhibition called Living on the Moon! This was an interactive experience illustrating progress in lunar science over the last 50 years since the Apollo 11 Moon landings. The team displayed in-person at the Royal Society for a week in July and were invited back for an online summer science exhibition in 2020.

Living on the Moon! illustrated the journey from Moon landing, to lunar sample science, to the current generation of Moon rovers looking for water on the Moon, providing a forward look to the next 50 years and a vision of a permanent human presence on the Moon.

Visitors to the exhibit were invited to handle lunar samples, including the UK’s largest lunar meteorite (1.3kg) on loan from Graham Ensor for the exhibition (see Figure 1a) as well as Apollo sample discs on loan from STFC (see Figure 1b; ‘Borrow the Moon’ programme). Visitors were able to analyse a lunar meteorite under the microscope and have access to the interactive virtual microscope. Combined together, these activities gave visitors a chance to discuss with scientists what we have learned about the Moon from the study of rock samples.

Visitors were able to find out about current planned missions to revisit the Moon to answer outstanding science questions, such as the location of water and other resources, and explore the plausibility and challenges of enabling a sustainable human presence on the Moon through utilisation of local resources. Visitors were able to see a demonstration of how 3D printing might be used to produce structures and components on the Moon using local materials (see Figure 2a) and were invited to take part in a virtual reality experience of driving a rover on the Moon (see Figure 2b), which proved very popular.

Figure 2 a (left) Example of the 3D printing set-up; b (right) A young visitor using the VR.

Visitors received various handouts at the exhibit including stickers, postcards, posters and educational booklets provided by the Science and Technology Facilities Council.

Figure 3. Example of postcard design, front (left) and back (right).

In 2020, the online event took place as a video update and an online Q&A, with questions sent in from the public to the Royal Society in the preceding weeks as part of #RSAskTheSpaceXperts. The team taking part was fronted by Mahesh Anand, Sam Faircloth and Hannah Sargeant from SPS, alongside Neil Bowles from Oxford. In advance of the event they also recorded some videos answering questions that came in early, and these can all be found on the ‘Living on the Moon’ playlist on our YouTube channel. You can catch-up with the tweets sent out from the @OU_SPS Twitter page here and here.