In 1969 the ambition of our founder, Scot Jennie Lee, changed the world, giving anyone, anywhere the power to learn. Established by the Royal Charter and globally recognised, The Open University has pioneered distance learning for over 50 years, delivering exceptional teaching and outstanding support to students across the UK and the world. Press play to discover more.

The OU was established by Royal Charter in 1969 and has operated across all four UK nations from the start. It has strong Scottish roots: our founder, the late Jennie Lee, was a Fifer, and the institution's first Vice-Chancellor, the late Walter Perry, came from Dundee.

Our founding ethos is as relevant today as it was over 50 years ago: we are open to people, places, methods and ideas. We promote educational opportunity and social justice by providing high-quality university education to all who wish to realise their ambitions and fulfil their potential.

Find out more about our 50th anniversary. 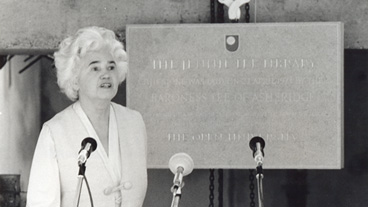 Jennie Lee was born in Fife in 1904. Her father and grandfather were miners and both were heavily involved in the Scottish Independent Labour Party. Jennie became interested in politics at an early age. She later went to university and became a teacher, but her main passion was politics.

At 23 years old, she was elected in 1929 as a Scottish Independent Labour Party MP for North Lanark. Jennie was the youngest member of the House of Commons, at a time when women were not allowed to vote until they were 30. In 1934 she married Welsh Labour MP Aneurin ‘Nye’ Bevan.

Harold Wilson, who became Labour Party leader in 1963, had already had the idea for a ‘University of the Air’. Labour won the 1964 General Election and Jennie, MP for Cannock, was appointed as the first ever Minister for Arts.

In 1966 and at the Department for Education and Science, Jennie - now in her 60s - played a major role in setting up the University. In her White Paper outlining her plans, Jennie Lee said:

The Government has decided to establish a University of the Air, that is to say, an open university. There can be no question of offering to students a makeshift project, inferior in quality to other universities. That would defeat its whole purpose.

She envisaged a university that would make it possible for students to learn from home, by providing them with educational TV and radio programmes, as well as posting out learning materials, to “Enable students to obtain degrees and other technical and professional qualifications.”

The OU received its Royal Charter on 23 April 1969. Registration opened in 1970 and the first students began their studies in 1971.

By then Jennie was a Life Peer of Parliament, Baroness Lee of Asheridge, an she was awarded an honorary degree at The OU’s inaugural degree ceremony in 1973. That year she laid the foundation stone for the first OU library at the Milton Keynes campus, named the Jennie Lee Library.

You can find out more in a blog about Jennie Lee and an online Jennie Lee exhibition.

In the following video discover more about Jennie Lee's involvement in establishing the OU, plus the University's development. The video is presented by OU academic and author of The Open University: A History, Daniel Weinbren. 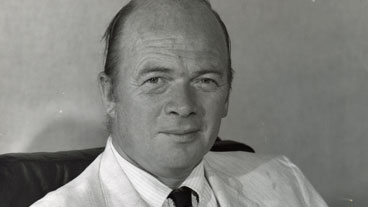 Prime Minister Harold Wilson described Walter Perry as: "The man who has done more than anyone to ensure the success of what is now recognised in Britain, and in the wider world, as one of the most important educational and social developments of this century."

You can find out more in a Walter Perry feature on the OU's Digital Archive.