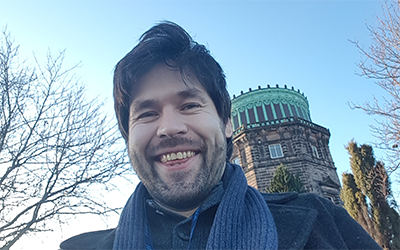 When Alastair Bruce from Edinburgh decided to undertake The Open University’s (OU) Introducing Astronomy course, he didn’t know that it would lead to a whole new career as an astronomer.

Originally trained as an actor at the Royal Scottish Academy of Music and Drama (now the Royal Conservatoire of Scotland), he explains: “I was working part-time, in-between acting jobs, to pay my rent and was growing a little restless without something to sink my teeth into in the quiet months.

“I had always been interested in science and astronomy, so when I found the OU's Introducing Astronomy course it started as a fun way to keep my brain fed. I hadn't considered it as a career change at that point.”

Discovering that the “flexibility and freedom to study where and when I had free time was exactly what I needed,” Alastair decided to continue studying with the OU and embarked on a Bachelor of Science (Honours) in Physical Science degree.

From initial module to degree

He recommends starting with a small module and seeing how it goes. “That first 10-point course had me hooked,” he says. “I didn't have to commit to the whole degree in one go either.

Being able to chip away at it in stages is a very nice way of progressing without feeling the added time pressure of a full-time course.”

“Being able to chip away at it in stages is a very nice way of progressing without feeling the added time pressure of a full-time course.

“There's a certain excitement you get when you open up the pack containing your new course materials for the first time too.”

Balancing his acting career and studies at the same time over the next seven years, Alastair found: “The part-time nature of the OU studies allowed me to cope pretty well.

“I don't remember feeling overwhelmed at any point, except perhaps when near to exam dates and deadlines.”

He especially enjoyed the online nature of the tutorial sessions and adds: “My observational astronomy module was particularly exciting as we were being trained to take data using a remotely-operated telescope.

My observational astronomy module was particularly exciting as we were being trained to take data using a remotely-operated telescope.”

“The online sessions with the tutors during this time was particularly beneficial. I remember the module was new so they were keen to hear back from us on how the whole experience had been as well.”

Graduating with First-Class Honours in December 2012, Alastair hadn’t made a conscious decision to switch careers until completing the degree.

“I was still enjoying acting, but I confess it was starting to feel like my heart wasn't truly invested in it any more.

“I had found the astronomy courses very rewarding and knew that I still had a desire to do more.”

Confidence to do a PhD

After graduating, he spotted the opportunity to apply for a scholarship at The University of Edinburgh to study for a PhD in astronomy with a commitment to work towards a future career in public engagement. He comments that studying with the OU “gave me the confidence to tackle the PhD, no question”.

“I actually found that the self-taught nature of the OU modules was really useful in preparing myself for life as a PhD student. It's a tricky thing to balance your time and goals over long periods and with little supervision. I felt like I could hit the ground running there.”

Alastair, who is now an astronomer and the first Planetarium Manager at Dynamic Earth in Edinburgh, says to anyone else who is thinking about changing careers: “There's no right way of doing things. I think the key is to focus on the thing that you love to do and invest your time in getting better at it whenever you can.

“My thinking evolved a lot over time, but I feel like I'm now in a job that caters to everything I love doing. Except singing – I may have to find a way of getting that into the mix too!”