Inspiration in the Third Space 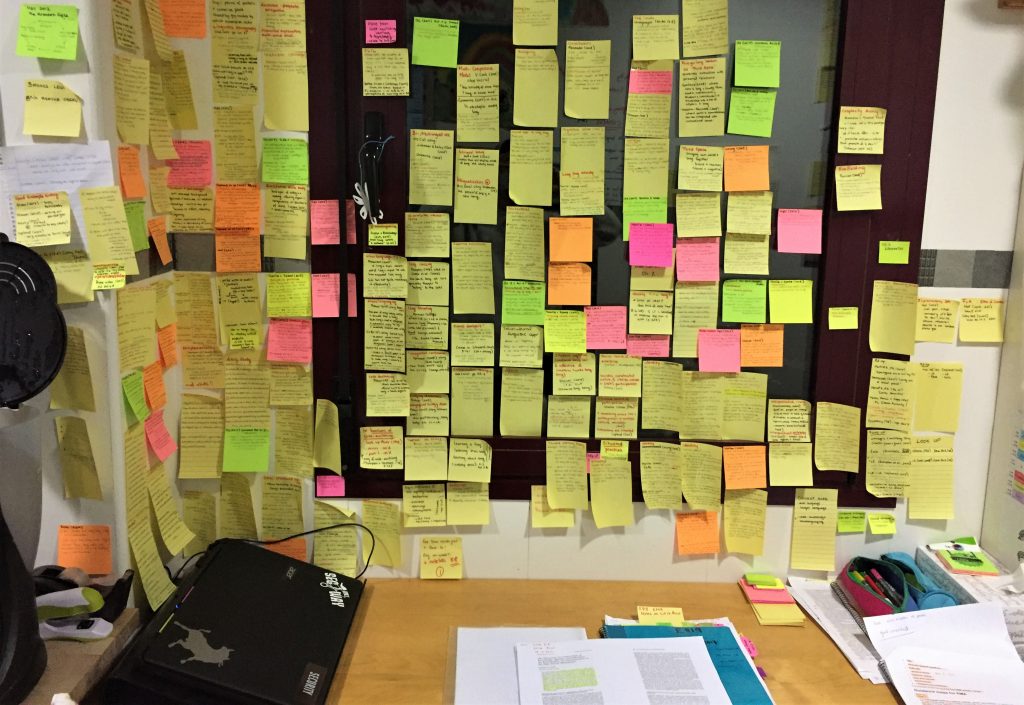 “It was the best of times, it was the worst of times…” While inspiration nodded its acknowledgement, anxiety reared its ugly head to taunt me on a regular basis. I had spent the module previous to EE819 panicking about a research topic. Being a private language teacher didn’t lend itself to extensive study of formal learning and provided little material to work with – or so I thought. As we progressed through the initial stages of EE819, I felt like there might yet be a glimmer of hope as ethnographic study took a front seat in our syllabus.

Then BOOM – enter centre stage, ‘The Third Space’. This is where lines are blurred and any combination along the formal-informal continuum has its merits (and faults, but let’s focus on the positives, shall we?). I found I was able to allocate my teaching environment to the Third Space, and that this too was a valid area of study. Having wrestled at length with doubts about the benefits of my teaching to my learners, my EE819 research project provided the perfect platform from which to begin systematic and critical study of this question. It would either assuage my guilt, or kick it up a gear.

I conducted a qualitative single case study that incorporated action research. It involved video and audio recording, participant journals, and (follow-up) interviews. Despite having only one participant (acknowledgement to said participant for being so dependable, committed, and patient), the amount of data produced over our ten-week data collection period was impressive. I spent many hours at my kitchen table transcribing and studying video data, poring through participant journals, reviewing and revising my literature review, and catering to the demands of two very rambunctious little monkeys. Oh, did I say monkeys? I meant my daughters…

Being a wife and mother as well as a private language teacher, I would spend the daylight hours living my ‘normal’ life, and then, come evening, I would retire to the solitude of the kitchen where I had my caffeine within arm’s length (literally), and the solution to most of my girls’ requests easily obtainable (let’s face it, water, food, and a first aid kit solve most daily child-related issues). But despite the division of actions between ‘normal’ and ‘study’ life, I admit that I was hard-pressed to halt thoughts on my research. Wherever I went, whatever I did, I was constantly thinking about how to condense and prioritise my findings, how to structure my interpretations in a clear and systematic way, and how to take the findings from my very informal teaching environment and make them relevant to formal pedagogical discussions.

I was battered by a combination of ‘eureka’ moments and self-deprecating thoughts of inadequacy. I experienced the highs of a well-formatted descriptive sentence that further served to link themes and the anxieties of staring at my computer screen while wondering whether I could ever pull it all together. Nonetheless, as I gradually approached the submission deadline, I was on track with my self-imposed writing schedule (summer holidays with two young children required an adapted timeline). As my data interpretation was iterative and ran parallel to data collection, I had the advantage of kick-starting the writing process early on. I wrote far more than 12,000 words over a period of three months, and the most painful challenge was to mercilessly cut themes from my discussions. With files full of data and a stack of literature at my side, I returned religiously to my research questions to ensure that the findings I included were the most relevant and evidentiary.

It literally hurt (okay, more emotionally than physically) to exclude themes – especially in relation to the action research aspect of my project. My limited teaching environment had suddenly expanded into a much larger world of potential learning, for myself as much as my learners. The act of reviewing videos and studying learner journal reflections enhanced my awareness and criticality of self as teacher while permitting me an appreciation of the environment I created for my learners. The EE819 research project became much more than an academic obligation. It was the confirmation I needed to accept that I was indeed teaching, but even more importantly, it evidenced how ‘Third Space’ learning fomented my roles as mentor and motivator to my learners.

It’s one thing to teach formal language structures, it’s another to inspire and motivate others to put aside their self-consciousness and be willing to engage in the target language outside of the language classroom. It took me almost ten years of teaching, three years of part-time Masters study, and a few months of research and manic writing, but I now proudly state that the latter has become my personal benchmark for success in my language teaching.

This entry was posted in Applied Linguistics. Bookmark the permalink.