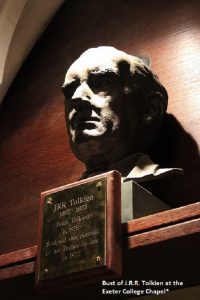 I recently visited this exhibition, which is the first Tolkien exhibition in 26 years and showcases artefacts from the Bodleian, Marquette University Library and the Tolkien family private collections, some never exhibited before.

As an avid Tolkien reader since my teenage years, I approached the exhibition mostly from the point of view of someone interested in all things Middle-earth. The collections definitely satisfied my readerly expectations; indeed, they exceeded them by appealing also to my scholarly interest in the history of the book and of reading. Let us explore them in greater detail.

Firstly, I was pleased to see that the exhibition avoided a purely biographical focus. The life of the author is illustrated through photographs, letters and personal documents, such as an endearing “account book” where the undergraduate Tolkien recorded his study hours, to be exchanged for kisses from his future wife Edith. But these are supporting materials for the main story of the exhibition: the processes through which Tolkien created Middle-earth and took it from handwritten sketchbooks to the printed versions of The Hobbit and The Lord of the Rings.

The exhibition revealed to me Tolkien’s skills as an illustrator and calligrapher, which were somewhat obscured by the cheap editions of my student days or by the more recent reinterpretations of his works in numerous media. In fantasy literature, illustrations are central to the creation of a shared fictional world. Tolkien is revealed as profoundly involved with the material format of his books as well as their textual side. He shows himself a more than capable illustrator, for example through his original watercolours for The Hobbit and especially through his striking wraparound cover for the first edition of the novel, which is still in use today.

Compared to the visual feast of The Hobbit, the section dedicated to The Lord of the Rings focuses instead on the transformation of ‘the new hobbit’ into an altogether more ambitious tale. A manuscript title page captures a key moment in this process, when Tolkien crossed out the early working title ‘The Magic Ring’ and substituted it with the definitive The Lord of the Rings.

The centrepiece of the exhibition for me are the numerous draft maps of Middle-earth. Tolkien used his maps to provide a geographical framework for his readers and to aid himself in the composition of the plot. The maps in the exhibition also highlight the complex and collaborative nature of his writing process. The early maps are a mosaic of additions and deletions, held together by glue and parcel tape. Later versions show Tolkien engaged in a dialogue with other co-creators, from his son Christopher to illustrator Pauline Baynes (whom he recommended as the illustrator of his friend C.S. Lewis’ Chronicles of Narnia).

Finally, the biggest positive surprise for me was the exhibition’s explicit acknowledgement of the most important of Tolkien’s co-creators: his readers. The section entitled ‘Reading Tolkien’ displays hundreds of editions of his works in numerous languages, together with moving letters from readers famous and less so.

These artefacts testify to the breadth and diversity of reader perspectives (the counterculture pins reciting “Frodo lives” or “Gandalf for President” are especially poignant). Even more so, they demonstrate the fundamental role of the reading public in the unlikely transformation of a weighty one-thousand-page tome into the most successful book of the twentieth century. While J.R.R. Tolkien is indeed, at a textual and visual level, “the maker of Middle-earth”, readers like me and the visitors of the exhibition can certainly claim a level of co-authorship through their continued support and reinterpretation of his imaginary world.