Creative Writing Associate Lecturer Csilla Toldy has won an award for Best Street Art Film at the Berlin Underground Film Festival for her film poem ‘Belfast Exposed’. Sally O’Reilly interviewed her about her work and how this project developed. 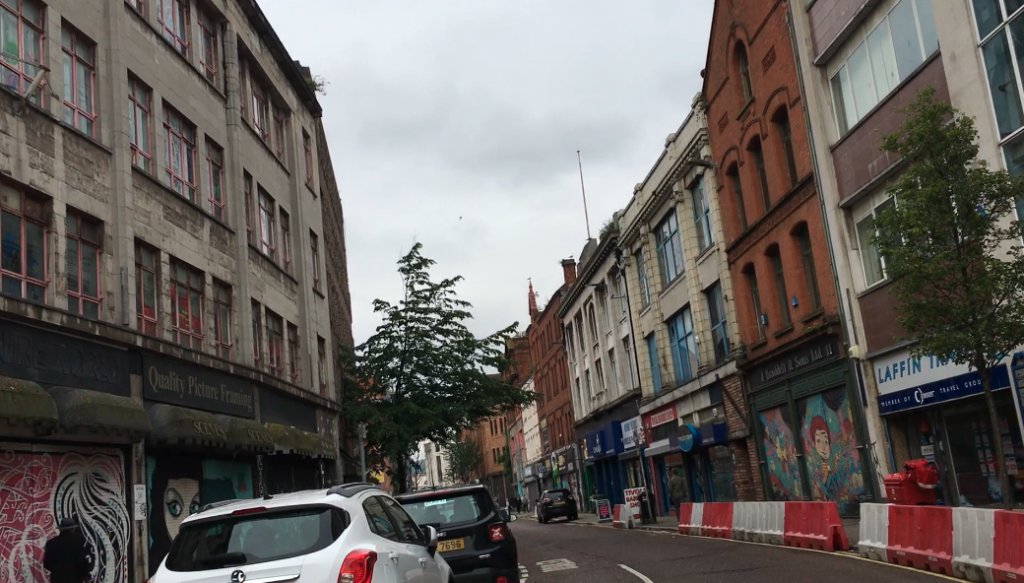 How does ‘Belfast Exposed’ relate to your previous practice as a writer/poet? How long have you been working with images?

I have been writing poetry for much longer than making video poems, but because I am a scriptwriter and I had an interest in art films and experimental films, I started to research video poetry as an artform. After making my first video poem (Point) with the support of Northern Ireland Screen, and having been selected with another (Hommage) to the Videoholica Video Art Festival in Varna, I was invited as a speaker for the Mix2 Conference of Digital Writing at Bath Spa University, where I delivered a paper on “Metaphors in videopoetry”. This paper is now published on academia.edu.

Is place in general and Belfast/Northern Ireland in particular important in your work more generally?

Yes, I wrote many poems about the cities I visited, and place is important in my prose as well. I lived in many different places during my life, and being on the move, on foot or by vehicle always inspires me.

How did you come to write this? What came first, words or images, or did it evolve in a different way? Was the idea of using multiple voices to create a choral effect there from the beginning?

I wrote the poem in the voice of a Syrian immigrant around 2015, when the migrant crisis started in Europe. It became one in a series of poems that I wrote about cities and I read them at venues in Belfast, Dublin and Bray. In 2019 I was selected to take part in the New Voices of Ireland Series 7 organised by the Centre for Creative Practices in Ireland. They select 10 migrant artists for each series and Series 7 had the theme of Cultural Memory – Transition, Temporality, Transcultures. I used the voices of my co-artists and put out a call for local speakers on Facebook to give me their voices for the film. I was interested in the diversity of accents. The idea was that I would use the footage of Belfast in movement with special focus on the murals and use the voices of migrants and locals mixed as a soundscape. People could interpret the poem as they pleased. The choral effect was developed during the editing phase.

Can you tell me about the process of producing it? How long did it take?

Filming happened during a couple of afternoons. I knew the places I wanted to show, East Belfast and West Belfast, the two hemispheres with their opposing murals, but we start the film in the Cathedral Quarter, the cultural hub of the city where the gay bar the Kremlin is situated with its Lenin Statue and the rainbow flags. I found this always exhilarating, for I grew up in socialist Hungary in the shadow of this icon. Each, the Protestant and the Catholic communities have marked their territories with their murals, of course, but the film finishes with the Rise sculpture created by Wolfgang Buttress, symbolising unity. Collecting the voices took longer and editing took about a week, which I did on my computer.

When did you receive the award? Was there a virtual ceremony? (Shame not to go to Berlin!)

I heard about being short listed at the beginning of a week in October and by the end of that week I got the award. It all happened very quickly. It is a shame that they had to cancel the physical event, but they will screen all the winning films next year and I am hoping to go to Berlin then.

What are you working on now? And do you have future plans for similar collaborations/multi media work?

Around this time last year I was commissioned by the Executive Office of Northern Ireland to create a public artwork for Holocaust Memorial Day 2020, to mark the 75th anniversary of the liberation of the Nazi concentration camps. I worked on this video poem in the first ten weeks of 2020. The launch was planned for 15th April, the day when the British liberated the last camp, Bergen-Belsen, but the pandemic made this impossible. The finished video poem, “Here I Stand” will be launched on Holocaust Memorial Day 2021, on 27th January online on the website of the Executive Office and the Holocaust Memorial Fund. It was a great honour to work on this film and it was a deeply emotional journey. For this, I wrote the poem at the same time when I applied, so it started with the text as well, but I created a story board in tandem. I travelled to Paris and Budapest to shoot and I used archive footage as well. The poem was inspired by the story of a boy, who survived Auschwitz because he lied about his age. His mother told him to join the other line and go with his older brother and thus she saved his life. The poem is voiced by the mother and the son as an old man, looking back. Alongside the video poem, I made a 30-minute reportage with survivors of genocides in the 20th Century for educational purpose. I am very upset about the rise of the far right in Western countries, including Hungary and Germany and even the UK, and I feel that living witnesses have to be given a voice. I was privileged to interview survivors from Auschwitz, Rwanda, Cambodia and Bosnia, and asked them what their message was for the youth of today.

My next commission is an eco-video poem for Earth Day 2021. This will have multiple translations of the same poem about the earth, which I wrote at the age of 18 in Hungarian, originally. I asked the translators to voice the poem for me in their own language. I am trying to get voices from each continent, and even in languages that are on the brink of extinction. I started to collate the footage during lockdown. It will be the same field and the same beach over the seasons, near the place I live, but you can imagine that the beach is polluted with the debris from the sea, plastic and…masks! This is work in progress, but I am hoping to raise awareness for environmental issues as well, and the often-neglected fact that the earth is our shared home.