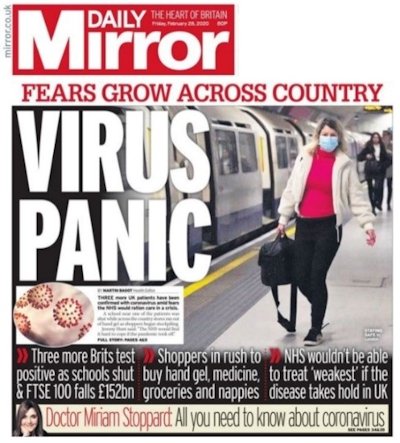 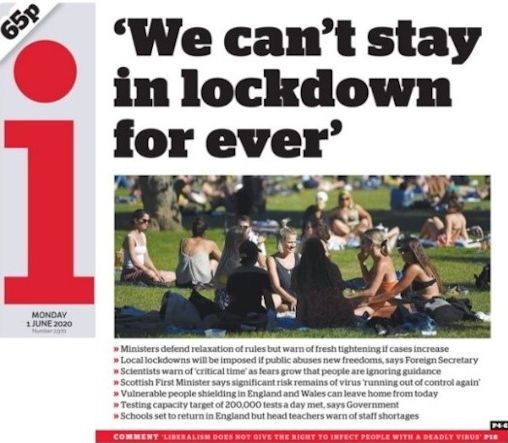 In UK newspapers, and elsewhere, reactions to the spread of the novel coronavirus Covid-19 have ranged  from the stoical (‘wash your hands’), to panic (complete absence of toilet roll and pasta in supermarkets), to constant praise for NHS workers, to anticipating the end of lockdown.

One of the (many) questions AstrobiologyOU is certain to be asked is what will happen if a novel lifeform from somewhere else in the universe is brought back to Earth. What can we learn from current understanding of people’s perceptions of and reactions to viral epidemics? There hasn’t been time to take a balanced view of people’s response to coronavirus but we can learn from work done in other major viral epidemics in the twenty-first century – H1N1 ‘swine’ flu (2009), Ebola (2014 onwards) and Zika (2016).

News media exist to report on the novel, and the constant search for the new can lead to an arms race of increasing drama. Although we probably over-estimate the effects of the media – to think it has more severe effects than it actually does[2] – engagement with media, alongside personal communication, is one of the ways we make sense of the world.[3]

In moments of crisis, academic experts are often recruited as trusted ‘heroes’[4] who can fight on behalf of the ‘poor’ and the ‘victims’. Knowing that people have a high level of trust in scientists (certainly higher than their levels of trust in politicians!) over the last few weeks governments have strained to show how their decisions have been based on expert advice. We have seen this on our televisions, as government ministers appear at daily press briefings flanked by a brace of experts.

The mass media are generally the ‘villains’ in this story but in recent years, and especially in online communities, the villains have expanded to include activists (who sometimes produce misinformation) and fronts for state and non-state actors (who deliberately produce misinformation). The challenge for academic experts is to be able to tell the difference: who we can or should engage with and needs to be shut down.[5] We see this in vaccination forums; given the huge range of anti-vaccine narratives, the pro-vaccine community is nervous about which groups they should reach out and respond to.[6]

Heroes have to be brave: to face the fear and do it anyway. But we can be heroically authentic and compassionate, valiantly listen to concerns and questions, and fearlessly temper our response to the group we are engaging with.

We’re all in this together

One of the functions of social representations is to make sense of new, threatening events, often by attributing responsibility or blame to specific collectives [6]

One of the ways we make sense of new threats is to ‘other’ the problem, attributing it to non-local habits, behaviours or practices: it’s the fault of corporation X, the hygiene habits of country Y, or the social practices of group Z.

It’s tempting to think that if people are given the facts, behaviour change will follow.  But understanding is something we create in community. The 2014-15 outbreak of Ebola across west Africa called attention to socio-cultural factors (such as funeral practices) that affected the spread of the virus. But it soon became clear that suggesting that such behaviour was irrational, or due to a lack of knowledge, wasn’t enough to change people’s behaviours and beliefs. What worked was engaging with communities to develop safe but culturally-acceptable practices; using culture as scaffold to enable change, not a barrier to prevent it.[7]

Not ‘othering’, then, but ‘togethering’: New Zealand has been praised for its response to Covid-19; the success of a country in coming together into a ‘team of five million’.[8] Good communication in scientifically uncertain circumstances needs broad discussion that accepts the limits of certainty and entwines scientific information with existing knowledge and beliefs.[9]

Pull back the curtain

simple notions of community, which project solidarity onto complex hierarchies and politics, can lead to ineffective policies and unintended consequences[10]

In The Wizard of Oz, the wizard tries desperately to keep the mechanics of his control hidden behind the green curtain. But we do science no favours by seeking to present only answers and discreetly covering the often-messy search for them.

On 30th January 2020, the New England Journal of Medicine[11]published a letter offering evidence of ‘transmission of 2019-nCoV from an asymptomatic contact in Germany’; just four days later, an article in Science[12] noted that study ‘contained major flaws and errors’. As researchers, we know that the movement and flow of debate is how we learn to trust each other and depend on our results.

There is considerable evidence that community engagement builds and support trust.[13]However, there is also considerable evidence that engagement is too often built on the idea that communities are static, socially coherent and visible rather than dynamic and context-specific.[12]Symmetric, dialogic communication is likely to lead to more mutually beneficial, long-term relationships[14]. Engagements that seem to be rolling out pre-formed plans jar can’t also be inclusive, participatory and collaborative.[12]

In a ‘post-trust’ [society] there is public skepticism of the motives of government organizations, which casts doubt on information these sources produce and the actions they take during crises[13]

The uncertainty that has become evident in the progress of the coronavirus outbreak demonstrates the importance of efficient dissemination of information, and information that can be trusted.[15] Universities, and researchers, are trusted, and we can draw on that trust when we engage with different communities. But we should be cautious about using emotionally-loaded and scary messaging; while this draws attention at the start, continuing to it use decreases attentiveness and understanding.[14] In the long-term, heavily-emotional messaging might cause unintended consequences: stress, panic and the infringement of people’s right to weigh the evidence and make their own decisions.

Dr Ann Grand
is a Lecturer in Astrobiology Education in the School of
Environment, Earth and Ecosystem Sciences
at the Open University