IOCOSE’s ‘Pointing at a New Planet’ (2020). Artistic engagements with the New Space age 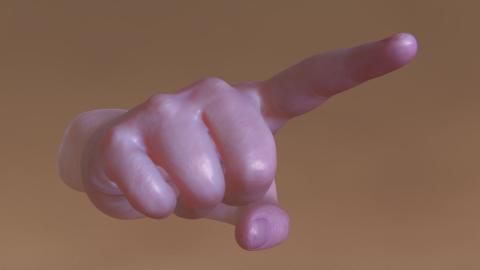 This blog hosts a conversation with the art collective IOCOSE: Matteo Cremonesi, Filippo Cuttica, Davide Prati and Paolo Ruffino. IOCOSE has recently created and exhibited the video artwork ‘Pointing at a New Planet’ (2020 – from now on referred to as PaaNP): a timely reflection on the entanglement of space, capitalism and the colonising imagination. The work is a video loop, which presents the superimposition of Elon Musk’s travelling pointer finger upon the Martian landscape. A 3D model of Musk’s severed hand is seen increasingly pointing forward, towards more and more distant lands, while his most famous statements become the lyrics of a karaoke song which makes up the video’s soundtrack. The musical karaoke brings to the fore the paradox of current discourses on space travels and space colonization: they predicate the necessity for humans to expand into outer space, because of the destruction that they have contributed to create on their own planet. The soundtrack captures the urgency to ‘become a spacefaring, multi-planet civilization’.

IOCOSE, do you want to comment on this theme of the simultaneous failure of technological progress and its resurgence as a promise for humans in the New Space age?

IOCOSE: It is certainly interesting and bizarre to see the re-surgence of space travelling in our contemporary age, an enterprise that seemed to belong to the Cold War era. The NewSpace movement, that is, the myriad of private investors who currently promote and advance the colonisation of outer Space, have remarkably different scopes than the previous actors of space exploration. The Moon landing project, or sending animals into space, were motivated by political competition across the USA and URSS blocks. It was funded by national space agencies, supported through public funding, which involved the advancement of scientific knowledge. This is still happening nowadays through much more research-oriented and probably less fascinating (from the eyes of private investors) projects such as the International Space Station programme. What has really changed in this historical passage is that the new protagonists have taken the role that during the Cold War was occupied by the political propaganda associated with space colonisation. They do not just experiment with new technologies, but sell a new vision, a new horizon.

One of our main arguments throughout our artistic research consists in showing how this work of propaganda occupies a significant role within the NewSpace, and how it is embedded in the dynamics of contemporary capitalism. In this context the press releases count as much, if not more, than the missile launches. The reason for this is quite simple as it is mundane: companies such as SpaceX, Virgin Galactic and Blue Origin are on the stock exchange and the continuous growth of the stock value is more important than any actual launch, landing, or capitalisation. The promise of the New Space is, ultimately, addressed to investors. You could look for instance at the mission and business models of the NewSpace start-ups that are currently booming across the Western coast of the USA, and the large number of NewSpace portfolios sold to private investors across the world.

NewSpace in the final instance represents a return to the dreams of frictionless capitalism that were popular at the beginning of the digital age and that keep returning in our culture. A vision of capitalistic accumulation and growth that knows no crisis, as its resources are infinitely available. Space colonisation provides an ideal context, as space and planets are vast and could be infinitely exploited - similarly to how we thought of gold and petrol in previous historical eras. For every colonised planet, there is always a next planet.

The visual language of PaaNP is centred upon the action of pointing away from the known, towards territories that can be cast as ‘waste lands’ - as in a typical colonial imaginary. The hand gesture extends beyond Earth, imaginatively travelling from California to the Martian deserts. In one of your commentaries to the project, you highlight that – as in magic tricks – the action of pointing simultaneously shows something and hides something else. If the action of revealing the promise of a new world is evident, what is this performance hiding?

IOCOSE: As it happens with the best magic tricks, the pointing is hiding the hand itself - precisely what we have decided to show in our artwork, the hand, which appears across all our videos and prints. The ‘hand’ is the enunciating body, the gesticulating and pointing of Elon Musk at his press conferences. A hand that wants us to imagine futuristic colonies on Mars and the Moon, while in fact there aren’t any and never there will be in our lifetime. The gesticulating hand points at 3D renderings of future cities on Mars as if they were just about to become real, available only to the quickest buyer. It is important to remark that, even in the wildest predicaments made around the NewSpace, the possibilities of actualising a human base on Mars are so long-term that it makes little sense to think of it as something to invest on, bet on, or look forward.

Having said that, there isn’t anything wrong in thinking about the future of the humankind beyond our existence. While this is undermined by the ongoing sixth mass extinction, global warming and the effects of the Anthropocene, we still want to emphasise the over-the-top statements made by Musk, Bezos and their colleagues. In Pointing at a New Planet we are participating in this absurd and exaggerated vision of the colonising-hand, flying over a 3D rendering of Mars, singing songs on how great this is going to be. We want the audience to (metaphorically) sing along.

I want to dwell on the idea of futurity. In the ‘soundtrack’ we hear: ‘science fiction sometimes comes true’. I wonder if we could reflect a little on what sort of fictional future is hailed here and what sort of cultural imagination is at play. Science fiction is a ‘plural’ genre, some of which – as in the case of Ursula K. Le Guin for example - defies the determinism of technological progress and instrumental relationships with the land that seem to underpin Musk’s narratives. How can we open up the discourses about the future to these other forms of imagination?

IOCOSE: The idea of futurity put into play is about the domestication of the future, the exercise of power as ‘potestas’ over the ‘potentia’ of the infinite outer Space. The futuristic imagination of the actors involved in the NewSpace is of the utopic kind, where technology is merely enabling human agency. The kind of futuristic imagination that we would expect ending in a tragedy, if this was a (good kind of) movie, or book. But other forms of imagination are already out there, even though the pointing finger has told us to look elsewhere. They appear when we realise that the space separating us from our goals (Mars, Venus, and whatever planet comes next) is anything but smooth. It contains frictions. Weather is unpredictable. The surface is bumpy, fragile, dusty. Dreams of a seamless terraforming tend to mess up when actualised. We cannot even imagine what would happen when the colonisation project reaches its final stage, when the flying hand is expected to land and settle.

We don’t even need to look much into the future to open up our imagination. The politics and economics involved in launching missiles and testing brings us back to the Earth, and to the myriad of conflicting projectualities that co-exist on our planet. For example, in November 2020 SpaceX acquired certification to transport NASA astronauts to space, becoming a potential provider of service for the US space agency, thus complicating the connections between private and public investments. Other projects by Musk involves NeuraLink, a company that aspires to create high-bandwidth connections between human brains and computers. There are countless things already happening on planet Earth, at micro and macro levels. Philosopher Donna Haraway inspired us in thinking about the many different entanglements that can be traced at any moment in a knot of human and nonhuman relations. The NewSpace is a messy ball of wool.

I want to thank IOCOSE for agreeing to publish this conversation and for sharing an image from Pointing at a New Planet.