Is there life on Mars?

Mars is usually depicted as a dry, cold, and inhospitable world… but plenty of evidence tells the story of a more benign planet: a Mars spotted with lakes and rivers. Nevertheless, at some point in the past, around 3.5 billion years ago, the martian atmosphere started becoming thinner and thinner, prompting the liquid water on the surface of the Red Planet to evaporate. You might wonder how we know this: if we watch attentively, we can see the incisions that water carved, like scars on the skin of the planet. These features are also covered with salts, such as chlorates and carbonates, and especially sulphates. These minerals originate when water and rocks interact with each other, resulting in the dissolution of the rock, and upon evaporation, a salt deposit appears – this is why we call these rocks evaporites. 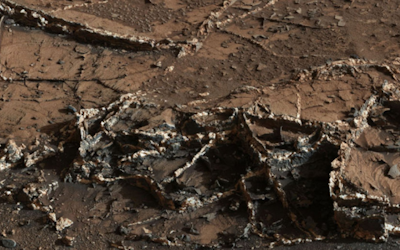 The presence of water on Mars is of the most vital importance, since water is fundamental for life as we know it. Life is nothing but a series of chemical reactions that happen inside of cells, and these reactions can only take place in water. Water is so fundamental that even the microorganisms inhabiting the most extreme and dry environments on Earth possess a series of very smart adaptations that allow them to, on one hand, scavenge water from their surroundings, and on the other, to prevent water escaping from them.

So, let’s fast forward and to Mars nowadays. On the first line of this post I mentioned that Mars is depicted as dry… but is this completely and absolutely true? Not really, Mars contains ice, but also there is evidence that liquid water can appear temporarily on the surface, and there is growing evidence that liquid water could appear underground. Knowing that water could appear on Mars, and also being certain that Mars has had water in the past, it seems less impossible that life could occur or has occurred on the Red Planet. One of the things we do at Astrobiology OU is to try to find whether life is possible, and if it is, how we can detect it.  Under the “extreme” conditions of Mars (from a human perspective) it is not likely that life is going to be present in the form of animals or plants, which could be easily spotted, but instead as microorganisms. Sending humans to another planet with microscopes to hunt for microbes is far too complicated -and expensive - with our current technologies, but this does not mean that we do not have an arsenal of other techniques to try and find those pesky critters. 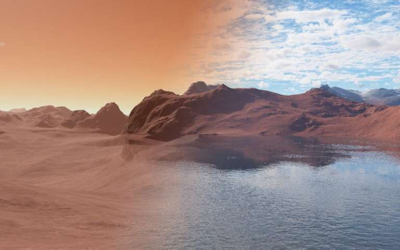 The cascade of the chemical reactions of life is messy and leaves a series of footprints in the environment when it happens, what we call biosignatures – these can range from minerals, to organic molecules, or gases, just to mention a few. Gases are particularly interesting since they easily travel from the point they were produced and accumulate in the atmosphere. Here they can be analysed using powerful telescopes, or even better, using analytical instruments on board orbiters. One of these gases is methane, which on Earth is majorly produced (up to 90%) by certain microorganisms, called methanogens or methanogenic archaea.

Several times in the past, methane has been detected on Mars, but does this mean that there is, or there has been life there? That would be a very intriguing and certainly exciting possibility, but methane can also be a product of certain rocks reacting with water, or when certain hydrocarbons break at high temperatures. In order to answer this question we need to be able to grow microorganisms under the conditions that know to occur on Mars: we have records of temperature, we know what kind of rocks populate our neighbouring planet, and even know what the attributes of atmosphere are, so with all this information, we can predict how conditions would be and see if microbes can survive. Methanogens are so specific that they almost exclusively produce methane, whereas the non-biological methane production reactions, yield other gases. 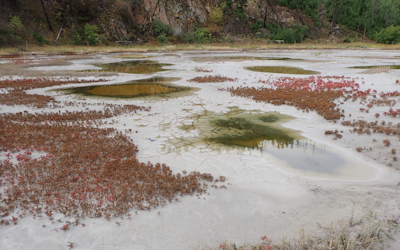 The highest chances for this to succeed is trying to grow microorganisms from similar environments – what we call analogues. There is no perfect analogue on Earth, but instead, different environments can share similarities with the planet we want to investigate. Some paragraphs ago I mentioned about sulphates, and the obvious location to try to find the best suitors to survive under the harsh martian conditions would be sulphate-rich lakes. Although not as abundant as others, such as carbonates or chloride-rich lakes, there are some examples in Australia, Spain, and Canada. With those microorganisms in our hands, we can see if they are able to thrive under the expected conditions on the Red Planet, and most importantly analyse which gases they produce and compare them to the ones we have detected on Mars, and see if maybe, we can find hints to try to answer the question that David Bowie asked in the 70s… Is there life on Mars?

Mario Toubes-Rodrigo
is a Post Doctoral Research Associate
in the School of Environment, Earth and Ecosystem Sciences at the Open University