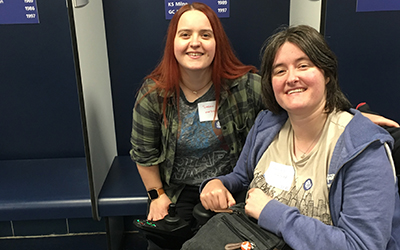 For Edinburgh-based married couple Karine and Sarah Mather studying with The Open University (OU) has been invaluable in giving them both a focus while coping with the challenges of Karine’s primary progressive multiple sclerosis (PPMS).

“It’s one of the best decisions I have made since leaving work,” Karine explains. “It has given me something to focus on and The Open University have made it so easy for me to achieve my goals.”

After meeting on their first day as students at Napier University over 18 years ago, the couple decided to both return to studying after Karine had to give up work due to her MS and “wanted to do something to keep my brain occupied”.

“As I started to need to spend more time caring for Karine, and seeing how much she was enjoying her OU studies, I decided that it was the right time to go back and do a Physics and Mathematics degree,” Sarah says.

Sarah had always wanted to study physics but “was always pushed away from science and maths at high school and regretted it for a long time”, while Karine decided to study for a Bachelor of Science (Honours) Psychology with Counselling degree.

Without the Part-Time Fee Grant neither of us would be able to afford to study.”

Studying was made possible for Sarah and Karine after they both qualified for the Part-Time Fee Grant, which provides a vital source of funding for many of the OU’s students who are on lower incomes and balancing their studies with health conditions, caring responsibilities, and part-time work.

“Without the Part-Time Fee Grant neither of us would be able to afford to study, which would be a real shame as we both feel it has helped our mental health greatly as it gives us something to focus on,” Sarah adds.

The couple were attracted to studying with the OU because it gave them the option to be students at home, making study more accessible for Karine and helping Sarah to balance her part-time job and caring responsibilities.

“I didn’t have to worry about accessibility and this gave me the peace of mind to pursue the course,” Karine says. “They have also been great helping with access to adaptations which have allowed me to study easily from home.”

Instead of being told I couldn’t do something, the OU actually came up with lots of options.”

Karine can no longer use her dominant hand and was concerned this would be a “huge barrier” to her studies. However, after undertaking an assessment through the OU, she found: “Instead of being told I couldn’t do something, they actually came up with lots of options for how I could do things.”

This included accessing funding for a new laptop, which was set up with voice-recognition dictation software and a program that reads any on-screen text out loud that has been invaluable when Karine’s fatigue has been bad.

“Without this help I simply wouldn’t have been able to progress with my studies,” Karine explains. “The OU have also supplied ring-bound textbooks so that I can lay them flat and my tutors can send me the tutorial slides beforehand so that I can annotate these with my software.

“Once I get to a year with an exam, I also know that I can get an assessor in the house so that I can take my exam here and not have to worry about accessibility and disturbing anyone with my voice activation software.”

After struggling in her second year to balance working, caring and studying, and after becoming sick over a three-week period, Sarah also felt supported by the OU.

“I was so far behind I couldn’t see myself catching up,” Sarah says. “I spoke with my tutors and was assured that I had done enough to pass the continuous assessment so I could keep going but not hand in the next few assignments, or I could bank my scores where they were and come back next year. I decided to take a break, let myself get better and started again in October 2020. It was definitely the right choice.”

Sarah urges anyone thinking about studying to “Go for it! Having the opportunity to study for pleasure has changed my outlook on lifelong learning and has given my self-worth a boost.”

“Neither of us can imagine studying any other way than through the OU,” she says. “They have provided so much support for both of us and practical support that allowed Karine to feel like she was able to reach her potential.”