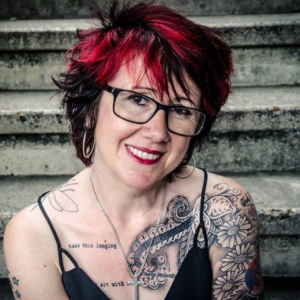 Caron Freeborn, who died in April after a short illness, was a poet and novelist, and an AL in Creative Writing at the Open University. She taught on A215 and A363. She was also a close personal friend for almost 30 years, but, more than that, she inspired and influenced me massively, just as she inspired so many students through her teaching for the OU, the University of Cambridge and Anglia Ruskin University.

I first met Caron and her partner, Chris, in 1991, when we were students at the Summer School in York for A319 Literature in the Modern World (Caron and Chris had met each other at another York OU Summer School the previous year). Caron and I bonded over the similarities in our backgrounds: we were both from working-class families and the first in our families to get a University education. We also bonded over some of the texts and writers we encountered on A319, above all, the poetry of Tony Harrison, whose representations of working-class experience spoke to us in powerful ways.

Although Caron was in many respects a typical OU student, she didn’t complete her OU degree, instead using her credits to go to Lucy Cavendish College, Cambridge, to read English. To many in Cambridge she may have seemed an unlikely student, with the kind of Essex accent still not often heard within the more traditional colleges, but it was for her sharp intellectual rigour and the breadth and depth of her passion for literature that she stood out, not for her accent.

After I completed my OU degree and my MA at Sheffield University, Caron and Chris urged me to apply to Cambridge for my PhD, something I would never have considered. Fired by Caron’s example, I went on to Wolfson College, Cambridge, and completed my PhD on Harrison in 1999. My life and career have turned out in ways I could not have imagined, had it not been for a chance encounter at an OU Summer School.

After graduating, Caron went on to teach for Lucy Cavendish and for many other Cambridge colleges, and began teaching for the OU in 2006. She loved teaching mature students, and they loved being taught by someone with the sort of life experience and worldview still too rare in academia.

Our ALs change lives, and Caron changed more lives than most. Many of her AL colleagues took to the tutor forums to express their admiration after her death. Roger Moss, who took over her A215 students when she went on sick leave, said ‘there’s a handful of writers in the group producing energetic and daring poems that actually sound as if they’re written in 2020’; Caron would have appreciated this as the finest possible testament to her teaching. Jo Barnden, another colleague, described Caron as ‘a wonderfully lively, entertaining, vibrant woman, who always educated us on poetry so eloquently’, which encapsulates her.

Caron was a truly gifted writer. She published three novels: Three Blind Mice (2001), described by Marian Keyes as ‘a dark and compelling love story of a genre that could be called East End noir’; Prohibitions (2004), a literary thriller again set in the East End; and Presenting … the Fabulous O’Learys (2017), a bold and imaginative take on King Lear, updated to the 1980s. Georges Perec is my hero (2015) showcased Caron’s innovative and compelling poetic voice(s). In the Editor’s Introduction to that volume, Mandy Pannett wrote:

I was intrigued by the title Georges Perec is my hero and asked Caron to elaborate: ‘I’m captivated by Perec’s questions about how we give common things a meaning, how we rescue the details from the assault of the Big Stuff. That’s what I want to do: rescue the details in which we live. The cigarette butts. The smudged lipstick. The ordinary that is so bloody odd’.

And that’s what she did in all her writing. Caron’s work didn’t get the wider audience and critical attention it deserved, which was (and is) a great pity. Her first two novels were published by a major publisher that didn’t seem to know what to do with her. Attempts to raise her profile weren’t always successful. An interview with a national newspaper around the time of the publication of Three Blind Mice was pulled for lack of space because of the death of a well-known entertainer, or as Caron put it to me in an email: ‘They aren’t publishing the interview ‘cos Harry Secombe went and died, the selfish sod!’. Caron’s poetry collection and her final novel were taken up by small publishers who ‘got’ her, and she felt happier there.

Caron’s partner Chris was my best man and Caron read Yeats and Donne beautifully at my wedding to Jill. Not to be morbid or anything, but I had her pencilled in to read poetry at my funeral when the time came, too, so this is a bit bloody inconvenient (bad taste, I know, but Caron didn’t mind a bit of bad taste). The lines I would have wanted her to read, from Tony Harrison’s translations of Palladas, I offer here as a tribute to Caron and to our friendship:

Death’s a debt that everybody owes,

And if you’ll last the night out no-one knows.

Learn your lesson then, and thank your stars

For wine and company and all-night bars.

So drink and love, and leave the rest to fate.

To those who knew Caron, hers is the most unreal of deaths in this most unreal of times. Whatever pain and sadness we are feeling, though, is nothing compared to that of Chris, and their two sons, Jude and Gabriel. I hope sometime soon her friends will be able to get together to celebrate her life. Caron was a remarkable woman, a unique writer, the best teacher many students ever had, and a wonderful friend.

Caron can be seen and heard reading some of her poetry on YouTube at https://www.youtube.com/watch?v=r647drryS7g&t=38s

Some of Caron’s more recent poetry can be found here: https://thebluenib.com/caron-freeborn-new-poetry/