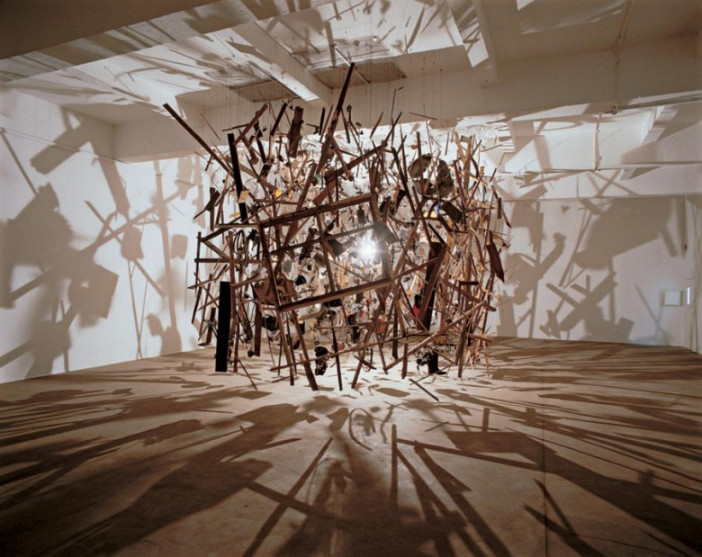 As an introvert, and usually working from home, the lockdown has allowed much of my practice to go on unabated. Some aspects have intensified: developing an active imagination and reflection are two examples that come to mind. While in some ways productive, there’s always the lingering threat of such faculties lapsing into torpor, lethargy, or morbid daydreaming. As immersive as my own bookshelves have been, the tranquillity of my back yard, and embrace of digital technologies, underlying my new methods is a quiet despondency.

Still immersed in a grief process, after losing my partner, and left alone in a flat, surrounded by our combined possessions, is a dangerous recipe – especially as a poet, where life is often fraught with precariousness and introspection.

From my first experience of a PhD, I know it can be isolating at the best of times; the ideas just too rarefied for friends, family, or pub conversation. Now, though, the restrictions on movement and socialising have greatly exacerbated this reality. I miss having a workplace, with those familiar water cooler moments; and I feel at some remove from my colleagues, living as I do in the North-West. Though I am clear in my purpose and grateful for my vocation. This, for now, is a Creative Writing PhD with the working title Cold Dark Matter: The Ekphrasis of Modern and Contemporary Art, supervised by Siobhan Campbell and Jane Yeh.

As a means of survival, I imposed for myself a structure and discipline. I replaced my familiar café environment with a picnic table. I’ve written many of my poems in cafés: maybe it’s something to do with finding an optimum decibel level for my creative flow, or I feel reconnected with human presence.

Image shared under Creative Commons Licence: “let me show you” by kygp is licensed under CC BY-NC-ND 2.0

I also had to replace my excursions to galleries and museums with the use of art history books, exhibition catalogues, and virtual museum tours (e.g., Kettle’s Yard). My home library has revealed overlooked marvels, as I’ve lived out a similar narrative to the one in Xavier de Maistre’s A Journey Around My Room.

My practice research focuses on the ekphrasis of modern and contemporary art; and thus far I’ve enjoyed writing in situ: in front of a painting for instance, or spending time in the holdings, having arranged a private viewing. On such occasions, I’ve sketched first drafts that incorporated, in some way, the details on the surface of the artwork, the texture, the detritus, and so on; details that may not been seen in a reproduction. There’s also the smell of the gallery, the sounds around me – the chatter of tourists, the screams of children – and the paratextual features: the blurb, the frame, or other images in juxtaposition, curated alongside.

Inspiration has, no doubt, been affected. I have been less productive during lockdown. It’s likely that we’re not wired to flourish while detained and enduring a monotonous routine. It might also be the case that – at this stage in writing what will be my second poetry collection – I’m less eager to just write another poem, especially if it’s similar to something I’ve written before. The reflective part of my thesis has aided my awareness of such repetition, while I’ve become more conscious in general of my decision-making and poetics; though this is a challenge, as I’m still habituated into an M.O. that’s often instinctive. I’ve also found that analysing the complexity of my inner dialogue can be overwhelming; or lead to the realisation that my mind is, on some level, preoccupied with nerdy considerations, such as obsessing over whether to use parataxis in the third line of a ghazal.

My recent confinement has also been, like many kinds of limitation, enabling. I’ve begun, over the past few weeks, a series of poems that respond in some way to the pandemic. One recent example is my poem ‘An Exploded View’, which takes its title from an installation by Cornelia Parker (‘Cold Dark Matter – An Exploded View’):

Without being able to see Parker’s artwork first-hand, my poem begins with recalling it to mind. I visualised her installation (an exploded shed, frozen in time), then visualised how my poem could look, set out on the page with a shape analogous to the artwork. (For now, at least, my words are ‘exploded’ in fragments around the page.) During my research, I consulted Google Images, which provided a series of intriguing viewpoints under different lighting conditions; and yet I was aware the re-mediated artwork was no substitute for standing in the gallery. So many angles are elusive; my distance from the work is accentuated; and the device through which I look (an iPhone) makes the jpegs obscure and subject to unwanted reflections in the mid-afternoon sun. In this poem, and others, the technology – with all its filters and frustrations – becomes part of what I write about, along with peripheral aspects of my often incongruous lived milieu (‘a sky-dance of swallows’).

Despite ongoing struggles in seeing art through such screens, I’ve been drawn to André Malraux’s notion of the ‘Imaginary Museum’: how, in a culture of reproduction, art is now potentially more accessible and democratic. Likewise, I’ve applied the idea of the ‘death of the author’: rejoicing in my own interpretations or misperceptions.

For now, I’m content to borrow at least half of Parker’s title for my collection. A title, I’ve found, can have the power to drive a collection forward, to give it an identity or coherence. Many of my poems – like ‘An Exploded View’ – look to clash disparate lexicons together: in this case, art and cosmology; and I like how ‘cold dark matter’, rather than a phrase coined by Parker, is also a term that refers to around 85% of the universe, which remains invisible. In addition to suggesting how my ekphrastic collection is tethered to this and other artworks, the title is apt for another reason: my poems make use of scientific vocabulary to explore the metaphysical questions that arise in the space of bereavement.