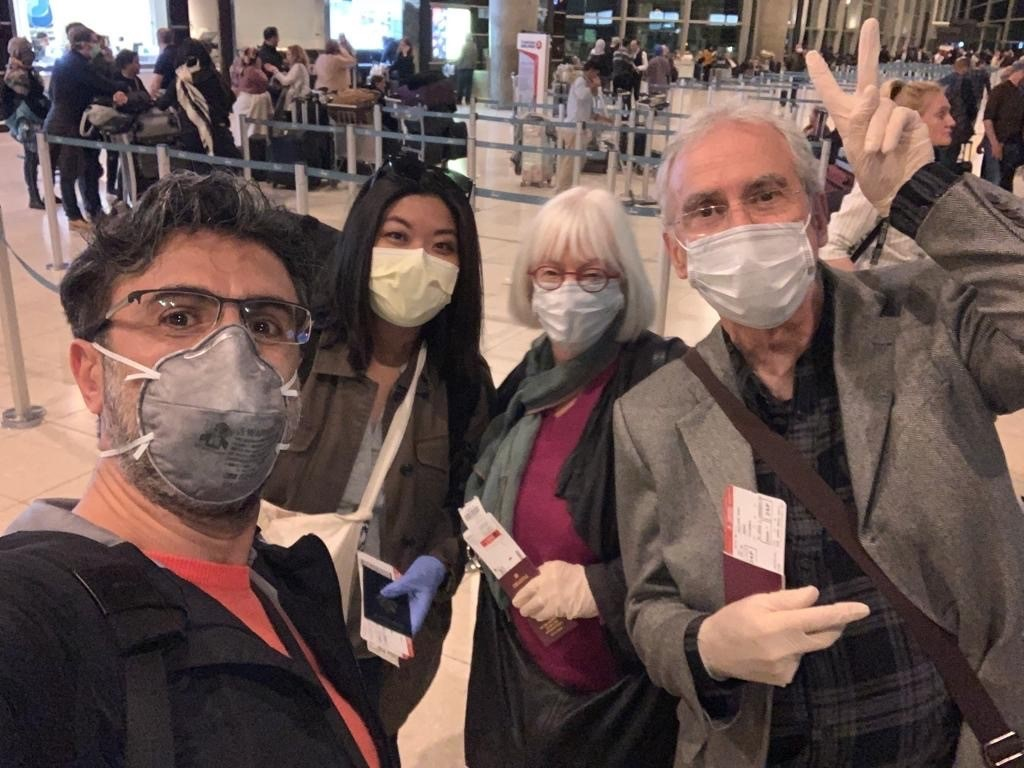 Last week my wife and I were in an SUV heading down the King’s Highway through the Jordan desert.  We had glimpsed the Promised Land, and were on our way to Petra, forty-five kilometres ahead in the deepening dusk.

Our holiday was an add-on to a visit to Amman arranged by the OU for me to chair the revalidation of the Arab OU’s MA in English Literature.  This was switched at the last minute to Walton Hall because of the impending C-virus crisis.  We gathered to interview our Arab colleagues by videolink, with a successful result.

But I could not cancel our holiday without losing the entire cost.  So off we flew to Amman on Royal Jordanian a day after the revalidation to start our tour. Alas, it was not to last long.

Suddenly our driver’s mobile phone rang.  He had just been told that Petra was closed, and so too all other tourist sites in the country.  The airport was shortly going to close too.

In something of a panic, we got him to turn and head back to the capital as fast as possible, while I tried to rearrange hotel bookings and a flight home on my mobile.  As we drove on, our driver tried to reassure us. ‘It’s OK. You stay with me.  Learn Arabic.’

We stopped at a roadside refreshment centre for mint tea.  A busload of Germans were milling about.  One of them held out finger and thumb to me: ‘We missed it by so much.’  I nodded.  ‘Us too.’

For some time I could not get through to either the Embassy or our travel agency.  Eventually the Embassy responded, No, they did not repatriate under these conditions, best for us to keep on trying our travel agent – who, after saying all direct flights were full, found us a flight via Istanbul departing at 2.35 a.m. a few hours before the airport was to close.

The next night we gathered in the hotel lobby with a handful of other guests, and our packed suitcases, ready to depart.  Our driver messaged in a panic – he was outside, but not allowed to pick us up, there were police everywhere.  As he spoke, we saw the hotel doors being sealed.

After further exchanges between us, the driver, the police, hotel staff and other guests, it emerged that a woman at the hotel a week or two earlier was a C-virus suspect. It was unclear whether anyone was thought to have it more recently, though we saw an ambulance arrive and leave.

For  moment chaos reigned, as people rushed to and fro across the lobby trying to get agreement for our group of guests to leave the hotel. Time was passing at an alarming rate, and no one appeared to be in charge or clear about what was happening. A young Kenyan worker from a Dead Sea hotel grinned at me: ‘It’s okay, man, it’s just life. We take it easy, huh?’  His flight was due to depart in less time it than it would now take to reach the airport.

As the minutes ticked by, we became desperate at the thought of being trapped in the country for weeks.  We sought information from a new arrival who looked official. Could we leave?  No, we had first to be tested for the virus.  And then? We had to wait for the results.  How long would that be?  Four to six hours.  Too late!  Don’t you think it would be best to just get rid of us?  We asked.  This seemed amusing.

Then suddenly we were herded down to the hotel basement where, beside the pot plants and Spa signs, tables were hurriedly set up, and a group of medics in white protective gear and floppy blue socks appeared.  They gestured us to approach and sit down one by one in front of a doctor, who stuck thin sticks up our noses, saying ‘if you must sneeze or cough, please sideways’ and then told us to be gloved and masked, and go.

We were guided through a side exit, only to be halted by a stern figure in military uniform talking on a mobile.  No, you cannot leave.  Back to the lobby, more uncertainty as more minutes passed, until at last the doctor’s word was accepted, we were hustled out and into a waiting ambulance, which screeched off, siren blaring, our luggage (sprayed with disinfectant) with our driver, who raced behind us.

After dashing through the airport terminal to check in and pass security, we were stopped in our tracks. Our conspicuous arrival meant further questioning, and our passports held while another doctor was called.  He had to be satisfied that we seemed healthy enough to be let loose. Our temperatures were taken and at last we ran aboard our Turkish Airlines flight with seconds to spare.

The next day we learnt that our tests were negative.