‘Of These and Other Worlds’: Reflections on the C. S. Lewis Festival, Belfast

Saturday November 3 is described in the brochure as ‘The Day of Magical Thinking’, but it seems to me that we were privileged to enjoy a whole week of magical thinking. The title of this year’s C. S. Lewis festival ‘Of this and Other Words’ (November 3 – 7) is adapted from Of Other Worlds, a collection of Lewis’s essays and stories in which this theme is explored. He gives warning that it is a serious matter: a sojourn in fairy land, ‘far from dulling or emptying the actual world, gives it a new dimension of depth [ … ]. It is an askesis, a spiritual exercise’.[1]  #

When, in the spring of 1916, he first read George Macdonald‘s Phantastes: A Faerie Romance for Men and Women, he found that a light from the other world came shining into this one, adding cheer to mundane things like ‘the bread upon the table’.[2]  This is Belfast, a city unrivalled for its hospitality, and that is how the festival begins, with bread upon the table (‘Festival Launch Breakfast’ at the Park Avenue Hotel), and yes, it is enchanted, both by its quality and by an inspirational speech made by Damian Smyth, Head of Literature at the Arts Council, and also a poet known for his ‘search for the uncanny, and how the local becomes the universal’.[3] 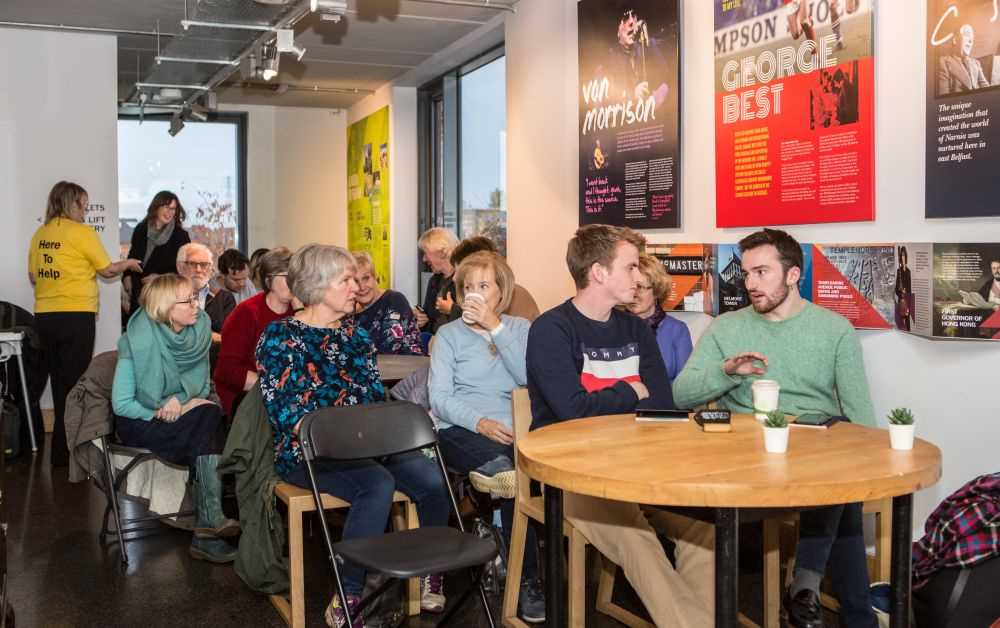 There are workshops in crafts and creative writing, activities for children, concerts, lectures, and book discussions, some seventy events in all. I choose from the list of lectures and book discussions, and soon I begin to notice something unexpected: a reversal of the usual meaning of ‘safe space’ as a venue, or an event, in which controversy is forbidden. It’s unexpected because, in this deeply divided society, a dangerous courtesy has developed which treats the whole city as a safe space of the usual kind. It obliges people to avoid saying anything that would identify their position as Catholic or Protestant. I’ve fallen into it myself. Because I’m Scottish, everyone assumes that I’m Protestant; I seldom correct the mistake. It’s dangerous because, although the violence has subsided, the reasons for it have not, and the words spoken are not the words that are meant, which are these: ‘I can’t ask, but I need to know, and all the time we talk I am looking for the clue that will tell me whether you are one of us or one of them’.

This being so, what is likely to happen when the Socratic Debate is given the motion: This House Believes that Churches are Holding Our Society Back, attracts a capacity audience, and has together on the same stage, the editor of the Irish Freethinker, the pastor of an ‘alternative’ church denounced as heretical by most of the others, an uncompromising Catholic, and the director of the Evangelical Alliance, all of whom speak, with passion and eloquence, the words that are meant?

There was no debacle, but plenty of fierce argument, focusing on Conor Cruise O’Brien‘s indictment of ‘the harsh re-emergence in recent years [ … ] of “sacral nationalism”’.[4]  It was pointed out that sacral politics had bedevilled Northern Ireland for four hundred years, but that evening people hammered out their views on abortion and same-sex marriage without compromise, but with good humour. Someone remarked on the relief of having a ‘safe space’ in which to do so. The motion was carried by a small majority; such an outcome would have been unthinkable just a few years ago.

This atmosphere prevailed throughout the festival. In ‘Faith and Fiction Readings’, Jan Carson, who was brought up in an exceptionally strict Presbyterian setting, spoke of her love for the Catholic writer Flannery O’Connor; academic Andrew Cunning chose novelist and essayist Marilynne Robinson, a Congregationalist with a liking for Calvin; Pádraig Ó Tuama, Irish speaker, poet and leader of the Corrymeela Community read to us from the poems of Emily Dickinson.

Corrymeela works tirelessly for reconciliation. I warm to its description of sectarianism as ‘belonging gone bad’.[5]  Then there was ‘Exploring the Protestant Imagination’, addressing tough words to both sides: to the Republicans that their works are not works of art, they are merely defensive, because art must imagine beyond itself; to the Unionists that that name is a misnomer, because they are not Unionists at all if they refuse the citizens of Northern Ireland the same rights as are enjoyed everywhere else in the United Kingdom.

I postpone writing about the ‘Till We Have Faces Book Discussion’ because that needs a whole piece to itself, which leaves me just enough space for one final reflection. Emma Must read to us from some of her engaging and delicate poems, including Belfast Pastoral which describes a city transformed from that of the Troubles. The last line goes round and round in my head: ‘And this is no longer the city you’ve read about’.[6]  Alas, it is, but hidden under the courteous veneer I spoke about earlier.

As the new Glider bus passes the small Catholic enclave of Short Strand, I look at the network of ‘Peace Walls’, and remember that Emma Little-Pengelly, DUP Member of Parliament for South Belfast, was so concerned about its name being given to the bus stop that she set up a petition to try and change it.[7]  But despite her best efforts, there is hope. Sometimes the peace walls open, as happened two months ago on Townsend Street when the heavy metal barrier that separates the Shankill from the Falls was opened for a street party.[8]  This year’s was the sixth C. S. Lewis Festival. It will take many more, and many other festivals and family fun days, but the determination is there to fulfil Emma Must’s vision at its deepest level, and it will prevail.

[6]     The Future Always Makes Me So Thirsty: New Poets from the North of Ireland, ed. by Sinéad Morrissey and Stephen Connolly (Belfast: Blackstaff Press, 2016), p. 214.