Reading as a writer: ‘Offshore’

As creative writing academics, we constantly remind students about the importance of ‘reading as a writer’, and in my own reading I sometimes wonder to what extent this should be a conscious process, and to what extent something that I try to sublimate, reading as a reader, enjoying the book in a naïve way on first reading at least. In an ideal world, I would read everything twice, but as we know, this world is not ideal. Therefore, the way I consume books is a compromise, shifting between immersive engagement with the narrative and awareness of the techniques the author is using. As with the business of writing, novel reading is protracted, sometimes disrupted, sometimes seeming like a professional duty. 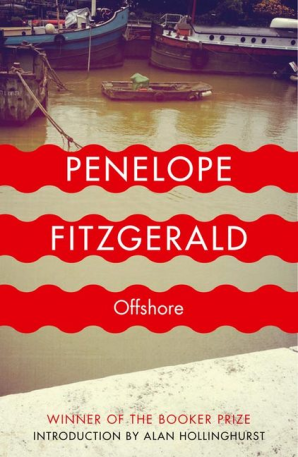 So looking back on my reading in 2018, what stands out? The novel which made the greatest impression on me was Penelope Fitzgerald’s Offshore, which won the Man Booker prize in 1979. The narrative focuses on a group of misfit Londoners, on the posh side of classless, who live in a row of semi-derelict boats on the Thames during the 1960s. None of them quite know what they are doing, or are entirely honest with themselves, and their compromises and misdemeanours drift with the ebb and flow of the river.

It’s hard to identify a protagonist, or a clear narrative through-line. But chaotic Nenna James comes closest to being its heroine, and her haphazard, wilfully disordered life presumably reflects that of Penelope Fitzgerald herself, who lived on a houseboat with her children after her first marriage collapsed. The point of view shifts among numerous characters including Maurice, a romantic and part-time rent boy, elderly marine painter Willis and Richard, an ex-naval man now working in insurance. All live half-way lives, at the edge of both land and water.

Nenna is incapable of doing anything practical, even a trip to Stoke Newington on public transport seems to faze her. Her visit ends in near disaster, shoeless in a rainstorm, pursued by a lecherous stranger. Yet at the same time, she is resilient and stoical, her expectations of life heroically low. In contrast, her young daughters Martha and Tilda are bizarrely precocious and competent, managing their bohemian lives with pragmatic ingenuity.

What I love about the book is its wry, strange humour, and Fitzgerald’s evocation of a lost London, not the place that we would associate with the Swinging Sixties, but more like the city that Dickens would have recognised. This metropolis is a post-war ruin not yet obliterated by developers, the river still a thoroughfare as it has been since Roman times. Fitzgerald evokes the inner lives of all these drifting, dreaming characters with intense precision as their stories unfold on the leaking vessels that the river will soon reclaim.

So what did I take from this book that will inform my writing? Initially, I was resistant to the way in which the point of view shifts are handled, with the narrative spinning around so much that I felt disorientated. But the effect builds over time, so that some scenes are focused intensely in the point of view of one character, and others achieve a choral effect. I also realised, by the time I finished the novel, that this kaleidoscopic perspective is consistent with the subject matter. The characters’ moods, desires and allegiances are in constant flux, just as the Thames is never still. Any piece of writing must similarly find its own shape, and the narrative mode should emerge organically from the material. And yet there is always the temptation to force a work of fiction into an already familiar format, to make it recognisable.

In addition, this book informs my knowledge of writing as an occupation, as this was a notoriously controversial Booker winner. The judges (Asa Briggs, Benny Green, Michael Ratcliffe, Hilary Spurling and Paul Theroux) failed to make a unanimous decision, unable to agree on whether William Golding should win with Darkness Visible or V.S Naipaul with A Bend in the River and so they gave the prize to Offshore which was ‘everyone’s second choice’, according to Spurling in a Guardian review of Fitzgerald’s collected letters. Spurling writes: ‘The presenter of the BBC’s book programme told her angrily that he’d been promised she would lose. Drunken reporters upbraided her for making them rewrite copy citing the favourite… according to her editor, the misery of this episode and its repercussions haunted her ever afterwards.’

What interests me here is the arbitrary nature of literary awards, and the way that they have increasingly become a measure of esteem and status. There is no reason to suppose that Offshore was inferior to the two books that caused the dispute between the judges, but Fitzgerald was made to feel that winning the Booker was a compromised achievement, that not being ‘the favourite’ meant that she was a writer of lesser quality.

Reading her novel today, it flashes with brilliance and strange insights. I’m inspired by her quiet eccentricity and her determination to pare her work down, creating something elliptical and magical in the midst of the chatter and turmoil of the book industry. The noise seems even louder now, so quiet eccentricity is even more important.

9 Responses to Reading as a writer: ‘Offshore’