I returned to Tetouan in 2016 and 2017, and will go back there again this coming October. In the meantime, a fresh opening arrived from quite a different direction. Our son works in the amusingly and inclusively entitled “Department of the Universe” at Chulalongkorn University in Bangkok, where he has a postdoc in String Theory. Coincidentally, this is the very university where Enright worked as a lecturer between 1957-9, and so I was very glad when, on one of my paternal visits, the English Department approached me with a peculiar assignment. The Brexit referendum had already happened, and nobody in Thailand could quite understand it. Why should the British nation take such a stupid step? They had invited the British ambassador to explain it all; he had accepted, and then on second thoughts ducked out. Could I step in? I am quite sure that my views on the British withdrawal from the EU were and are the very opposite of those that the ambassador in question might have felt obliged to defend in public, whatever his private misgivings about the matter. I agreed, provided I could go back in time and show how English insularity and English expansiveness have run alongside one another for centuries, and how both are evidenced in the literature. So, John of Gaunt’s “This sceptred isle speech” from Richard II against Defoe’s “The True-Born Englishman”, Hardy alongside Kipling, etc.. The modern parallels were not hard to draw, and de-colonization, I speculated, had brought this identity crisis to a flash-point:

As a result, the British people have been driven into two camps, each of which suffers from a different variety of postcolonial stress disorder. One half of the population has renounced imperialism and the jingoistic patriotism or nationalism that went with it. The other half still espouses a vestigial and sentimental form of  patriotic affiliation, a shadowy sense of entitlement without an empire to support  it. They clung to this myth or paradigm with increasing desperation as employment opportunities shrank, while in the meantime their globalized compatriots appeared to flourish as never before. In 2016, the tables turned. It was the second group, from which the Brexit campaign had drawn so much of its support, that Theresa May addressed last October in her conference speech, calling them simply the “public”. 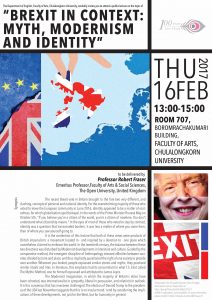 In the ensuing question and answer session I was left in little doubt as to relevance of what I’d been saying, not simply to Britain, but also to Thailand. Most countries when you come down to it have their own variety of identity crisis, and Thailand is no exception (nor is Morocco). To address this question in the lecture itself would, of course, have been miles beyond my brief. Neither Enright nor myself were exactly friends to cultural nationalism, but I was not going to fall into his trap when, in delivering his inaugural lecture on “Robert Graves and the Decline of Modernism” at the University of Singapore in November, 1960, he opened with an assault on the government’s policy of nurturing “sarong culture”. Singapore should be open to all influences, he had said, but the following day he found himself hauled before the Ministry of Labour and asked to account for his statements. He was brusquely informed that foreigners should keep their noses out of local affairs, which were none of his business as a mere “mendicant professor”, etc., etc.. Upon which he turned into a Penitent Professor and issued a letter of apology.

There was no need for me to weigh in thus clumsily in 2016 because, almost as soon as I had finished talking, the conversation backwards and forwards across the room took off in a most satisfactory and vigorous way. Just about everybody had an opinion as to the coherence or incoherence, integrity and need for openness of the nation. In Thailand there is a very lively tradition of public debate and dissent, not least among the students. Every year, in February, a football match is played between Bangkok’s two leading universities, complete with cheerleaders and shouting crowds. For the last few seasons this has culminated in a demonstration against the military authorities, pilloried on satirical floats. The latest fixture had just happened, and the authorities had shown no inclination to intervene. The principal comment in the English-language newspapers (of which there are two) was that this year’s offering had been disappointingly low-key and tame.

But it is not just nations that are afflicted with identity crises; authors and texts experience them too. The following year I was asked to return to talk about T.S. Eliot and, seeing as a book of mine on cosmopolitanism and cultural migration had just come out, I chose to concentrate on his polyglot and polymathic affiliations. It is no secret that many of these are Eastern since, on registering as a doctoral student at Harvard in 1911, Eliot had chosen to take a whole range of elective courses in Pali and Sanskrit. The result is that, even as late as 1941, coded references to the sacred books of the East pepper his writings. When I sought to demonstrate this, the result was a remarkable and rewarding instance of reverse instruction. I had no difficulty finding people to read out extracts from Buddha’s Fire Sermon or the Baghavad Gita in the original tongues. I supplied translations, but afterwards one member of the audience (admittedly a Russian) took me aside and told me that these had not strictly been necessary. In this context, and with these students, the poems by Eliot that I had been discussing, mostly The Waste Land and Dry Salvages, had stood on their heads. What had seemed supreme expressions of, in one case post-war disillusion, and in the other, of revived Christian spirituality, had become Asian landscapes with incidental glimpses of a crumbling Western world beyond. As a result, the distance and the intimacy had reversed themselves. What was familiar to the students was unfamiliar to me: it was their job to bring me closer to the source. It is my pious hope that the experience had been mutually beneficial. In any case, I had learned a lot. 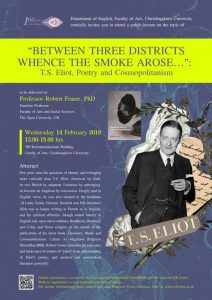 Teaching, as many of its practitioners will concede, is largely a process of learning. Especially if you are talking to diverse audiences, one of your most valuable pieces of equipment is ignorance, and preparation is often a matter of clearing the mind. As for ignorance, I flatter myself that I am unusually well qualified in that respect. It is a quality not to be scorned by any mendicant professor as he or she next opens up an Atlas, turns to the sunnier pages and inquires “What do we do now?”

One answer is to return to Morocco next February to organize a weekend creative writing workshop in the lovely hill town of Chefchaouen. Would anybody care to join us?