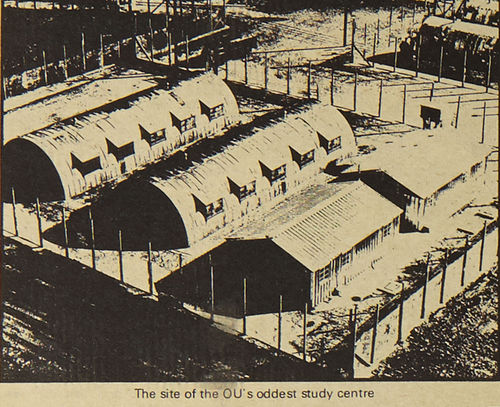 The Open University (OU) was founded in 1969. The following year a regional office of the University opened in Belfast. On the 9th August 1971 internment was introduced in Northern Ireland by the British Government, leading to the imprisonment of hundreds of people without trial. In response to a call from social worker Elizabeth Kennedy, to 'provide an outlet for these people', the OU started what its student newspaper Sesame referred to in May 1972 as 'the OU's oddest study centre' in the Long Kesh Internment Camp (located ten miles from Belfast). This was the seed for provision of higher education in British and Irish prisons by The Open University during the ensuing years of conflict.

The Time to Think collection captures the experiences of some of the hundreds of Loyalists and Republicans who studied with The Open University in British and Irish prisons between 1972 and 2000. The majority of these students entered prison as teenagers or in their early 20s. Many were doing long, and in some cases life sentences for their role in the conflict. 'Ordinary prisoners' also studied with the OU and continue to do so but are not the focus of the collection.

Over 180 different Open University courses were taught, between 1972 and 2000, in prisons such as Armagh, Crumlin Road, Durham, Full Sutton, Maghaberry, Magilligan, Parkhurst, Portlaoise, the Maze and Long Kesh (H Blocks and Compounds), amongst others. OU tutors came from a range of backgrounds, some teaching just one course, and others spending their careers teaching in the prisons. The collection includes the experiences of these tutors along with other OU staff, prison education staff, and those involved in the prison system who worked or studied with the OU.

A recurring theme within the collection is how education provided people with space and time to think during this time of conflict.

You can listen to some of the stories on the theme of 'Time to Think' in the short film on this page.