Working through the years of conflict 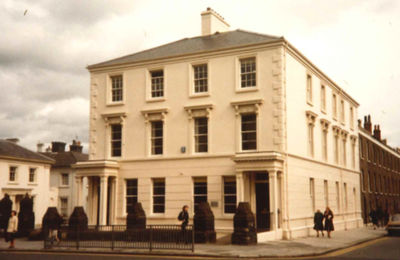 Looking back over the last 50 years, John Addy, Assistant Director of the OU in Ireland in 2019, wrote that:

The Troubles in Northern Ireland had already started when the OU opened its Belfast office in 1970. In The Open University's Open Forum radio programme of Thursday 5 April 1973, the newly appointed Regional Director, Gordon Macintyre, had driven the interviewer through the city, pointing out bomb damaged premises with "Business as usual" signs, whilst being overtaken by armoured vehicles. This was shortly after Bloody Friday, where a large number of bombs had exploded across the city in a single day, including one close to the OU, and with many casualties. The interviewer asked about the "schizophrenic situation of normalcy" and the effect that not knowing who might be about to harm you was having on the staff in the office. The response was that the OU in Belfast had kept going "pretty well". There had been power cuts and difficulties with public transport. Students were greatly impacted and disadvantaged and some lived in difficult areas, where their studies could be disrupted by "gunfire and distractions in the evening" and they might be unable to get out to Study Centres. However, the region had the lowest student withdrawal rate, and this might have resulted from the reduction of activities available to people at the time, especially leisure activities outside of work time.

'Naomi' and Claire O'Kane started work in the OU Belfast office in the 1970s and were still working there in 2010. In the two clips on this page, they look back to the start of the OU's work in the prisons.

Working through the years of conflict (page 1 of 3)