Exoplanet research at the OU has several strands. 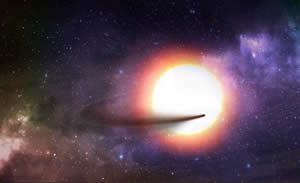 We lead the Dispersed Matter Planet Project (DMPP) which is finding some of the most important exoplanets for detailed study with the next generation of astronomy facilities (CHEOPS, JWST, ELT). DMPP target stars are identified by signatures of absorption in the stellar spectrum, which we attribute to circumstellar gas ablated from nearby analogues and progenitors of Kepler 1520b, orbiting stars which are about 1000 times brighter than a typical Kepler planet host. The DMPP exoplanets will allow us to measure the chemical composition of the ablating rocky surface, initiating the new science of exogeology. DMPP performs state-of-the-art, high-cadence, high precision radial velocity measurements to detect planets with masses comparable to Earth’s. A related project has identified possible nearby bright analogues of “Tabby’s star”. We are long-standing member of the WASP consortium, which is the most successful ground-based exoplanet transit discovery project. With the Red Dots Consortium we search for low mass planets orbiting nearby M dwarf stars, with the discovery of Proxima b – the nearest exoplanet to the Sun – being a particularly prominent result. 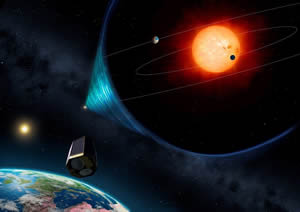 We are involved in the PLATO Development Phase. The Open University element considers the problem of astrophysical false positives that will contaminate the sample of exoplanet candidates delivered by PLATO. We are preparing tools to inform the PLATO field and target selection so as to minimize the number of contaminants, and to maximize information available for contaminant analysis of individual sources. We conduct large-scale numerical simulations of a synthetic Galactic population of single stars, binary and multiple stellar systems, and their planetary systems.

Our fully autonomous robotic telescopes, PIRATE and COAST, based at the Observatorio del Teide (Tenerife), conduct high-precision photometry and are deployed to monitor known or suspected exoplanet hosts stars for transits, transit variations, and out-of-transit variability. 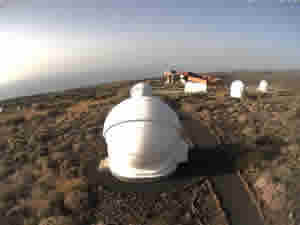 Image taken from webcam at www.telescope.org

State-of-the-art radial velocity measurements require careful consideration of the effects of stellar activity. M dwarfs are of particular interest since they offer a potential fast-track to habitable planets in very short period orbits. We use Doppler tomography and other data analysis techniques to recover starspot distributions on M dwarfs and to investigate their effects on line profiles as a function of spectral type and rotation period. Observations of earlier spectral type stars to search for earth-like planets in earth-like orbits will require the latest high-resolution spectra obtained with the upcoming and next generation of high resolution spectrographs. Recovery of planetary signatures in low-activity stars will only be achieved with the methods that we are developing. Using SALT, we are conducting a spectroscopic survey of southern hemisphere planet host stars. We use this to measure the log R’HK indicator of stellar chromospheric activity, thus identifying systems where there are star-planet interactions. WASP-43b is one such system, and is amongst the most active of main sequence stars.